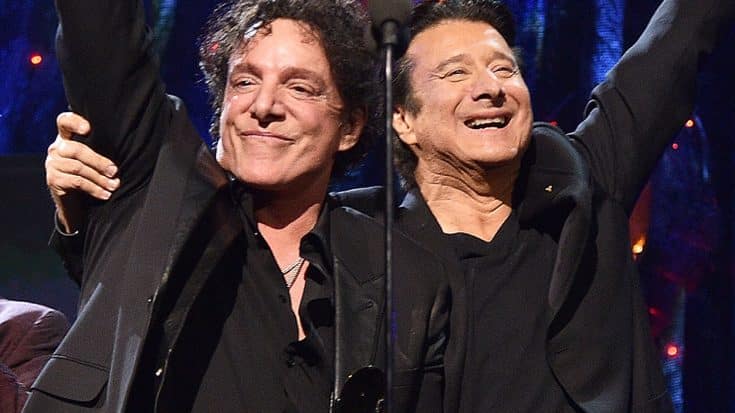 Reunited And It Feels So, So Good

We’ve spent the last 20 years hoping, praying, pleading – even appealing to Steve Perry directly through the likes of Journey guitarist Neal Schon and even Carlos Santana to rejoin Journey, if only for a little while. As news of Journey’s induction into the Rock and Roll Hall of Fame came to light late last year, the possibility of a Steve Perry reunion was closer to us than it had ever been but the former Journey frontman’s famed reticence when it came to anything related to his old band forced us to be realistic and prepare for the very real possibility that he wouldn’t show for Journey’s big moment.

Against all odds, however, Steve was there for Friday night’s festivities, just as excited to reunite with his former friends and bandmates as he was gracious to the legions of fans who propelled Journey to the top of the food chain and into rock and roll legend.

While Perry ultimately decided against performing with Journey and left the honor to current singer Arnel Pineda – who got his wish and finally met his idol for the very first time Friday night – his acceptance speech reflected a lifetime’s worth of love and gratitude to his bandmates as he gushed about their respective talents and thanked them individually and by name for “all the music we’ve written and recorded together.” Lastly, for the Journey fans who stopped believing that Steve heard them and cared, he had this to offer:

“You put us here,” he said. “We would not be here had it not been for you and your tireless love and consistent devotion. You never have stopped. I’ve been gone a long time, I understand that, but I want you to know that you’ve never not been in my heart.”

What a magical night! There’s no indication that Steve will ever be involved with Journey again, but who knows? It’s been an impossible year full of impossible events, and to forget that anything is possible would be absolutely foolish. Congratulations, Journey!