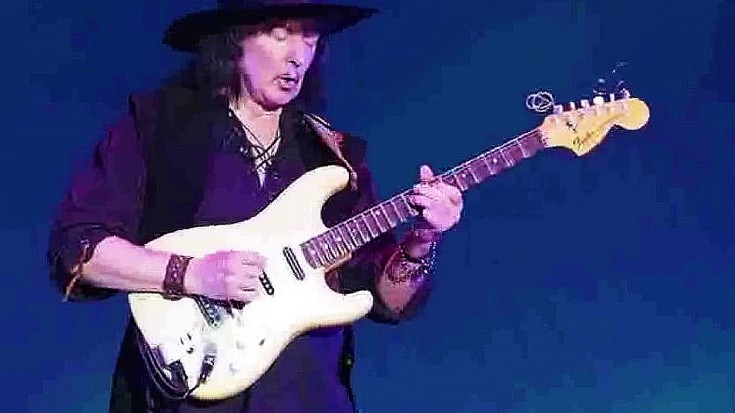 It’s been nearly two decades since one of rock’s most revered guitar players said goodbye to rock, exchanging blistering guitar solos for Renaissance folk but this weekend saw Deep Purple’s Ritchie Blackmore return to his rock and roll roots for his first rock shows in 19 years. Performing with a newly assembled version of Rainbow, Blackmore made his triumphant return to rock with a series of shows at this weekend’s Monsters of Rock Festival in St. Goarshausen, Germany and if time has passed between this and the last time rock fans saw him, we couldn’t tell and Ritchie never showed it. He jumped right back into a 13-song set that included Rainbow’s “Stargazer,” “Man on the Silver Mountain” and “Since You Been Gone,” and kicking things off with a high octane performance of Deep Purple’s in your face ode to adrenaline junkies, “Highway Star”.

Is this the beginning of a brand new career in rock for Blackmore, who turned 71 earlier this year? We wouldn’t count on it – the guitarist says that future Rainbow shows are at the mercy of how well the band is able to work together and how responsive the crowds are.

“If we enjoy ourselves and the audience gives us a positive vibe back, then I won’t rule out the possibility of continuing,” Blackmore said. “However, the second round of dates will probably take place in 2017. But the crucial factor will be the chemistry between the musicians and the audience reaction.”

Judging by the excitement of the crowd as they sang along with new Rainbow singer Ronnie Romero to “Highway Star,” something tells us that Ritchie never has to worry about his band ever receiving a lukewarm response from fans!