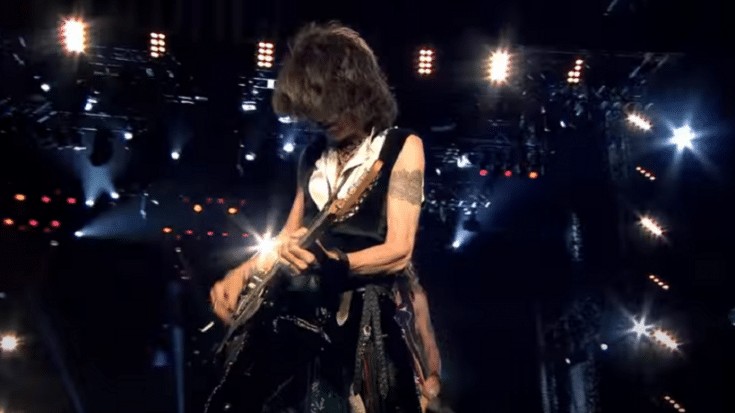 What would Aerosmith be without Joe Perry’s raw and dirty riffs? After all, that’s what rock ‘n roll is about right? Here, we are listing down ten of the band’s greatest riffs and they’re mostly from Aerosmith’s glory days in the ’70s. Of course, they’re one of the few rock acts who survived the transition in every decade and still managed to churn out stellar records past their heyday.

And we all know frontman Steven Tyler is always stealing the spotlight but for this post, Joe Perry and Brad Whitford will get to be the stars of the show.

Just when people thought they were creatively spent, Aerosmith churned out albums in the ’80s that reminded everyone why their legendary status is well-deserved. One of the standout tracks in “Pump” is “Love in an Elevator” with Perry’s gigantic riffs.

An absolute gem in their catalog, Perry delivered his monster riffs with the power and brutality of a guitar titan. While working on their fifth studio album, their hedonistic lifestyle was already taking a toll on them and it affected their creativity and productivity. Still, they emerged with this track which would eventually achieve classic status. Looking back at that rough period in their career, Perry said: “We were drug addicts dabbling in music, rather than musicians dabbling in drugs.”

The song that helped them get to the proverbial top of rock. It highlighted their versatility – that they’re not all hard rock and that they can do ballads with the same intensity and power. Perry’s riffs are somewhat subtle here, allowing for Steven Tyler’s raspy vocals to shine.

This song may be on their debut album but Perry sounds like he’s been doing it for decades. The energy, the confidence, the swagger – it deserves its classic status. It’s a simple chord riff but powerful and effective. Thus, it’s no surprise that it became a fan favorite.

It’s one of the highlights of Aerosmith’s second studio album “Get Your Wings”. A staple on classic rock radio stations, it’s built around Perry’s riff that he came up with. With Tyler quickly finishing the lyrics for the song, it’s a great example of The Toxic Twins’ songwriting chemistry.

5. Back in the Saddle

Perry wrote the killer riff on a Fender Bass VI. According to him, he came up with it while “lying on the floor, stoned on heroin”. They recorded it a year later. One of their heaviest songs, the lyrics contain plenty of sexual innuendo in typical Aerosmith fashion.

4. Toys in the Attic

Featuring Perry’s most addictive riff, he came barreling through and delivered the goods. It’s one of their most enduring and well-loved classics. Also, it’s been covered a lot of times by other rock acts.

With his gutsy and furious riff, Perry makes his guitar sing and in a way, stole the spotlight from Tyler. It became their breakthrough single and has undeniably stood the test of time. Bassist Tom Hamilton said, “I smoked a bowl or two and wrote the arrangements, the guitar parts. Steven took the intro, turned it around, changed key, and we used it as the tag, the resolution of the song. Brad, Joey, and I went home. Next time we heard ‘Sweet Emotion,’ it had the overdubs, the vocals, and I flipped out. I loved what they did with it.”

It’s bluesy and funky. It’s not just Perry, guitarist Brad Whitford also brought something exciting to the table. Whitford co-wrote the track and he recalled in the band’s biography “Walk This Way”, “After rehearsal one day, I played this riff and Steven yells, ‘I love it!’ and stared playing drums; he plays very different from Joey (Kramer) with a more jazzy approach, fun to work with. Joe (Perry) threw in a couple of chord changes, a D chord to an A, and then spiced up the chord a little.”

Perry’s greatest musical achievement is the riff for this Aerosmith classic. He came up with the riff and developed the song but a few days later, Tyler still didn’t have any lyrics. At one point, they even considered shelving the riff but suddenly, inspiration struck. Perry told SongFacts, “I just kind of let go and this riff started coming out of the left hand and the right hand, and then it needed a bridge, and I just kind of danced around on the fretboard a little bit, and before I knew it, I had the guts of the song. It had that kind of funk thing to it.”