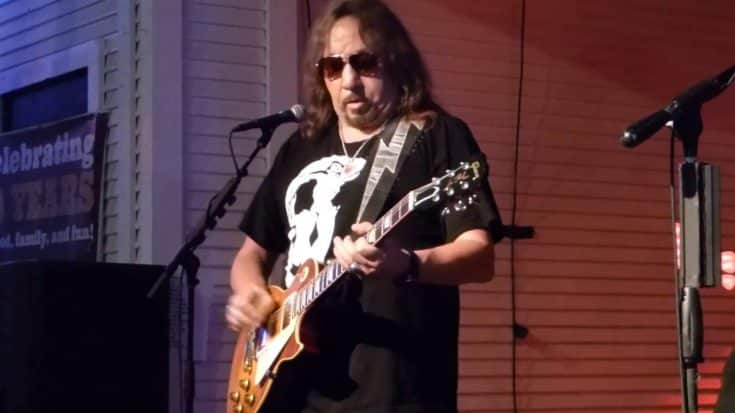 Fans, or even those who just wanted to get a taste of how rock stars live, this may be your chance.

If you have a thing for places like this, you can now book a night or two at Ace Frehley‘s scenic former house, which is now on Airbnb. The home has a total of five bedrooms and seven bathrooms and Frehley lived in this 6400-square-foot house from 1979 until 1983. Situated in Wilton, Connecticut, the rockstar sold it in 1986.

Frehley’s former home sits on over three acres of land, offering quite a bit of privacy, and you have to pass through an iron gate and over a stone bridge to get to it. Here’s a catch, there is even a recording studio located inside, which allows for an even more authentic rock star experience. The studio was essentially built underground and connected to the rest of the basement by a tunnel. John Storyk, the one who designed it said:

“You know, it’s kind of funny because artists having their own studios at home now is like buying a loaf of bread. It’s an every day occurrence. It’s not a big deal.

“Then it was a slightly new idea for an artist to have a ‘commercial-grade’ studio. When I say that, I mean a glorified recording studio. There was nothing non-commercial about it other than the fact that it was not going to be a commercial studio. And also, it wasn’t a giant studio — Ace didn’t need a giant studio. He needed room for three, four musicians.”

Aside from that, there are also other things to look forward to in this home including a private hot tub, a sauna, a pond with a waterfall, an outdoor fire pit, and a grilling area, and the best part is that pets are allowed, so you don’t have to find someone to watch your furry friends during your stay. If you feel like venturing off the property, there are 70 acres of private hiking trails nearby. All of these can be enjoyed at $740 per night plus other fees.

It gained a lot of positive reviews from the guests, one visitor said:

“If you’re a fan of rock ‘n’ roll memorabilia then you’ll enjoy the decor, too. Highly recommend this house!”