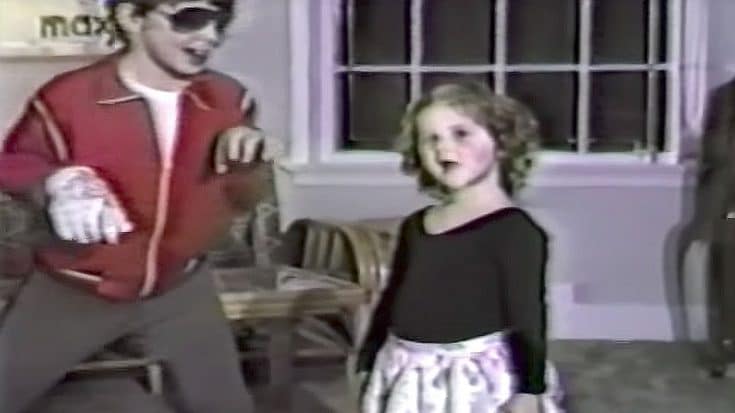 I don’t know about you, but one of my worst nightmares is of my parents waiting until we’ve got company to break out the home movies. Clearly, this is not a fear that A-list funny lady Amy Schumer shares with me, as evidenced by the comedic gold she brought along for her appearance this week on Jimmy Kimmel Live in her quest to prove that she is damn near impossible to embarrass.

Appearing on the first night of Kimmel’s week-long stint at the Brooklyn Academy of Music’s Howard Gilman Opera House, Schumer and her brother Jason, a professional bass clarinet player who sat in with the band, sparred over embarrassing childhood stories before Amy ultimately unearthed what should have been the most embarrassing childhood memory in existence: a home movie of Amy and Jason dancing to Michael Jackson’s “Beat It”.

“I couldn’t think of any embarrassing stories, because as you know I don’t get embarrassed, but I have a clip of the two of us dancing to Michael Jackson that I’d like to show,” Amy revealed after Jason shared a seriously funny – and cringeworthy – story about his kid sister.

Looking for all the world like Shirley Temple in her leotard and shimmery pink tutu, Amy shamelessly cuts a rug next to Jason, decked out in a red jacket, aviator sunglasses and the pièce de résistance of any decent Michael Jackson impression, a lone silver sequined glove on his right hand.

What really makes this already adorable video even greater is knowing that Jason actually comes along with Amy on her national comedy tours, making this video one of the brother and sister duo’s very first ‘live’ performances together. Check it out in the video below and be sure to thank your lucky stars that your siblings don’t share embarrassing stories about you in public – hopefully!