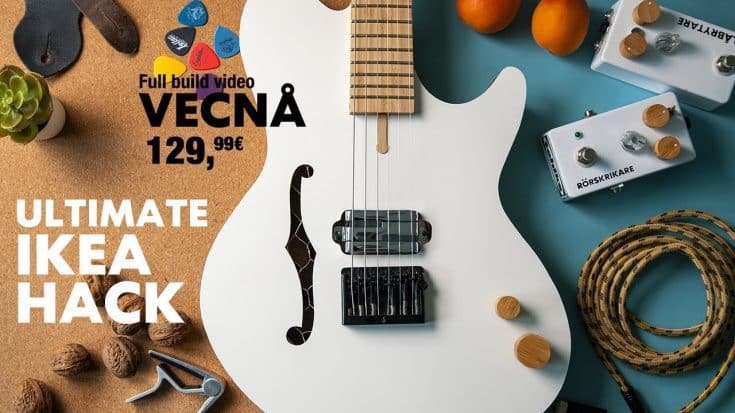 A guitar genius made a guitar out of Ikea furniture and it’s fjälkinge great.

Guitars can be built from almost anything not just from the usual wood material. Just last year a metal fan turned his dead uncle’s skeleton into a guitar, and it’s only been a couple of months since this same skilled Russian luthier constructed a working guitar out of McDonalds’ fries.

Now a new challenger was unlocked, Bisous, also known as Tchiks Guitars in YouTube, a self-taught woodworker from Brussels, Belgium. He is not the type of guitar maker who is content with the oh-so-predictable instruments made from potatoes or the dead, instead, he made a working guitar from IKEA furniture. Bisous said:

“The guitar started out as a joke. I remember going upstairs and telling my wife ‘I’m gonna make a guitar out of Zoé’s old bed.’ She rolled her eyes to the ceiling and asked me ‘why?’ then I immediately thought ‘this is the way’.”

He then skillfully combined parts from TUVA, HENRIKSDAL, LACK, MÅLERÅS, APTILIG, LILANGEN and KALLAX furniture kits. The flat-pack chippy was inspired by Brian May’s famous Red Special guitar, famously built by the future Queen guitarist from a fireplace back in 1964. Bisous added:

“In my original design, I was trying to emulate an actual solid body guitar, so I had to find a way to make bent sides, which is not an easy thing to do when all you have is stuff from Ikea.

“Another problem I had was that, to my knowledge, the only tone wood that Ikea uses is acacia, which they use in some of their outdoor furniture (and I don’t have any of those at home)

“Anyway, I kept finding excuses not to make the final jump, but the Red Special really opened up my eyes.”

For Bisous, May taught him that there are no rules and that is what exactly he demonstrated by making a legendary guitar with a body that is essentially pine and oak. See how the guitar was made on the video below.