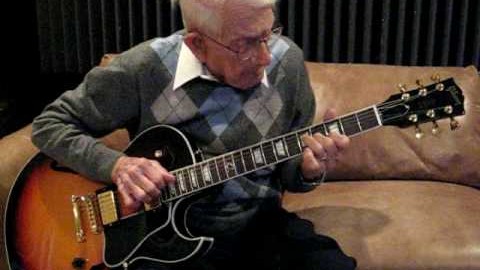 You Go Grandpa- Rock That Gibson

That sure has a lot of feel! I could watch him all day long and still not get enough. How lucky for anyone to have this talented grandpa. I really don’t mind spending all my after-school hours learning how to rip and shred that guitar. Awesome, awesome, awesome. I can only imagine back in the day, he probably used this to woo women. ho could blame them if they fell head over heels in love with him right?

“Just a Closer Walk with Thee” is a traditional gospel song that has been covered by many artists. Performed as either an instrumental or vocal, “A Closer Walk” is perhaps the most frequently played number in the hymn and dirge section of traditional New Orleans jazz funerals. The title and lyrics of the song allude to the Biblical passage from 2 Corinthians 5:7 which states, “We walk by faith, not by sight.”

Some real classical music right here and even better, a man who experienced it when it was popular. I also love seeing how he’s enjoying it and putting serious soul into each note. He deserves a guitar medal! I’m so amazed with the lovely chord structures. How I wish I’d even come close to him when I’m his age. You’re never too old to rock!

Interestingly, playing the guitar helps improve your concentration and memory which is why even at 92 years old, he seems as sharp as ever. It’s more than just muscle memory, it basically sharpens your mind and can be considered as a workout for your brain. There’s no better proof than this video – the music just flows through him and he actually seemed a whole lot younger when he played.

So you see, age doesn’t matter when it comes to rock ‘n roll. You can be in your 90s and still be a better guitarist than the younger generation.