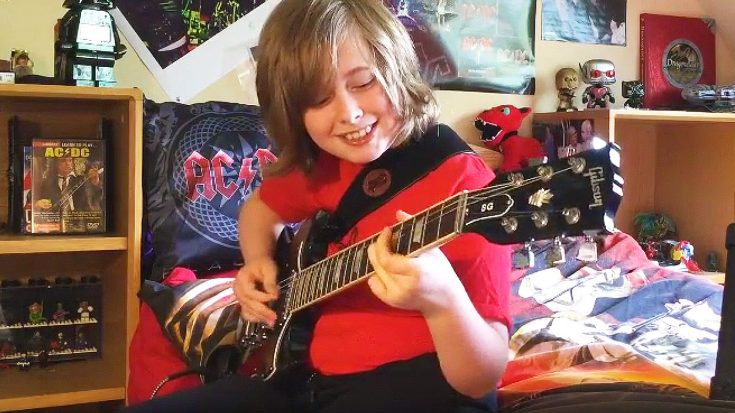 We salute this kid!

Nine year old Geai Thompson from the UK rocked out on his version of AC/DC’s “Let There Be Rock.” Boasting a Gibson SG and long hair, Geai holds a similar look to legendary AC/DC lead guitarist Angus Young. He shreds the songs epic riff, and mimics the song’s fast-paced solo almost perfectly. The video was uploaded, presumably, by Geai’s mom, who in the description of the video elaborates on how the song is Geai’s father’s favorite, and also how it’s one of Geai’s favorites as well. It’s always satisfying when you learn to play one of your favorite tunes!

“Let There Be Rock” was the title track off of AC/DC’s 1977 album of the same name. The song has original lead singer Bon Scott on the vocals, and is one of the more popular songs the band has. According to Geai’s mom’s YouTube page, Geai’s favorite bands include AC/DC, Judas Priest, Iron Maiden and Black Sabbath. Geai actually saw AC/DC last year in Glasgow, and attended the Download Music Festival earlier this year. It’s so relieving to see such a young kid enjoying, and learning this type of music. He definitely has a bright future ahead of him if he keeps it up. Rock on, Geai!

Check out his cover down below!