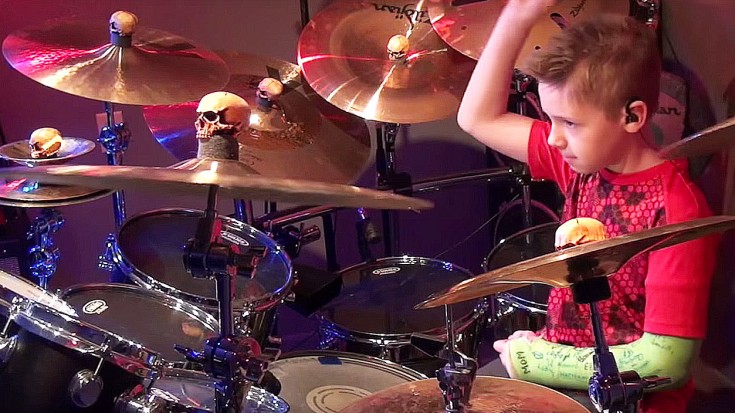 Known officially as “Metal Health (Bang Your Head),” Quiet Riot’s 1983 anthem for headbangers everywhere was cranked up to 11 when YouTube drumming sensation Avery Molek covered it last month. At 9 years old and sporting a broken arm, Avery proves to be not only fiercely talented, but virtually unstoppable in his pursuit of all things rock and roll as he shares yet another one of his favorite tunes with us in the form of another killer drum cover.

Fun Fact: Never fear – as of just a few weeks ago, Avery reports that he’s out of his cast and still rocking his fans with some brand new tunes!

Where many other drummers would have resigned themselves to being out of commission for 6 weeks to let a broken arm heal, our favorite YouTuber took it upon himself to channel the spirit of famed Def Leppard drummer Rick Allen and teach himself to play one-handed during the weeks he was stuck in a cast – no easy feat considering Quiet Riot’s “Bang Your Head” is one of the heaviest hitting songs of the 80’s! With every drum fill and cymbal crash, Avery is sure to blow you away with his second-to-none skill as he tears through this piece of heavy metal history!