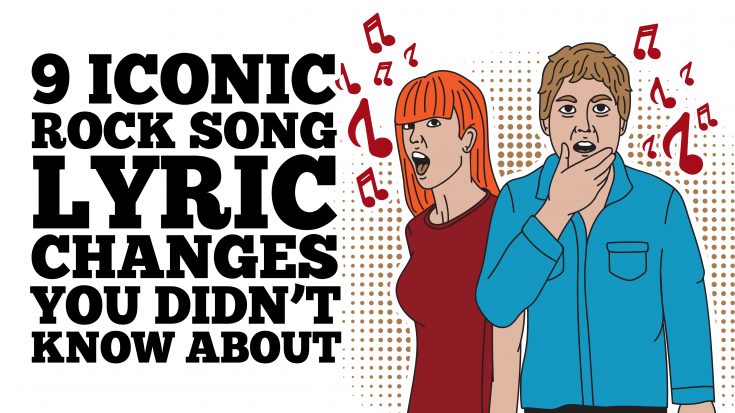 Joe Walsh’s hit about his reflections on Colorado’s rocky mountains was written after he his band the James Gang. It is very similar to John Denver’s “Rocky Mountain High”. Many people may not have noticed a slight lyric change from the original album to the live version Walsh sings.In his original album Walsh sings the line “Bases are loaded and Casey’s at bat…” but when he sings it live, it goes “Bases are loaded and Nixon’s at bat…”, and then ties it in with the next line “Time to change the batter”, a satirical nod to the political issues during that time.

Joe Walsh said that this song was expensive write because he had to pay for the repair of the damage done to his neighbor’s garden while he was living in Colorado shortly after the fall out of the James Gang. He was mowing his lawn that looked over the Rocky Mountains when he had a eureka moment for the lyrics. When he ran inside the house to write the lyrics, he left the mower on and it ran into his neighbor’s garden.

Nirvana’s single from their album “Nevermind” “Stay Away” was originally titled “Pay to Play”. In the literal sense,  “pay for play” is a phrase used to describe situations in which money is exchanged for services or the privilege to engage in certain activities. When Kurt Cobain was writing the lyrics to”Smells Like Teen Spirit”, “Stay Away” was still called “Pay to Play.” The original title might have had a sort of derogatory implication, as it also refers to a trend in the music industry where venue owners charge an up-front fee to performing artists for the use of their facilities. Performers are required to guarantee a minimum attendance through pre-show ticket sales, thus the term “pay-to-play gigs”.  It was producer Barrett Jones who suggested “stay away” for the lyric change when it was included in the “Nevermind” album.

In R.E.M.’s single “Little America, the line in the original was sung as “Jefferson, I think we’re lost” but was replaced with “Washington, I think we’re lost” after the riff between the band and their manager Jefferson Holt which caused both parties to part ways after 15 years of working together. Holt said of their separation,

“I’ve agreed to keep the terms of my agreement with R.E.M. confidential, however, 15 years is a long time, and as time passed, our friendships have changed. I think we found as time passed that we have less and less in common. I’ve become more interested in other things in life and wanted to spend more time pursuing those interests.”

The original lyric was supposed to be a nod to their long-term manager, but because they reportedly did not part ways on good terns, lead singer Michael Stripe has replaced “Jefferson” with “Washington” instead.

Did you know that The Beatles’ most-covered song in history  “Yesterday” was originally supposed to be called “Scrambled Eggs”? Imagine if that was the hit The Beatles released, it would have caused quite a lot of confusion, or it may have been accepted as complete absurd artistry.   Before the fruition of the this timeless classic, Paul McCartney had dreamt of the tune but had no words to put into it. For months, McCartney referred to the unfinished song as “Scrambled Eggs”. McCartney played with funny lyrics about being hungry to the tune, and it goes

Well, thank goodness he shifted gears and wrote the iconic heart-wrenching lyrics we know by heart today. In an attempt to poke fun, and release the real story and original lyrics of “Yesterday”, McCartney actually recorded the original version “Scrambled Eggs” in 2012 with comedian Jimmy Fallon!

Black Sabbath’s dark, dark song about a man’s desire to kill and destroy. It isn’t really surprising for many Black Sabbath fans and even listeners how “devilish” the band’s songs can sound sometimes. With lines about “witches at black masses” and “sorcerers of death’s construction,” “War Pigs” is not the song to introduce your conservative parents to rock n’ roll. As if to turn things even darker, the song’s title “War Pigs” was originally “Walpurgis” which is a sort of like Christmas holiday for Satanists. Bassist Geezer Butler who penned the song said,  “…to me, war was the big ‘Satan’. But when we brought it to the record company, they thought ‘Walpurgis’ sounded too Satanic. And that’s when we turned it into ‘War Pigs.’” Black Sabbath claims they actually got the idea from the war stories they had heard when they played for an American Air Force base during a tour of Europe.

In 1958, Rock blues pioneer Lloyd Price recorded a song called “Stagger Lee” which became a big hit and went to the top of the charts in 1959. Price’s version of the song was the one that actually made on Rolling Stone’s 500 Greatest Songs of All Time list ranking at number 456. What people may be surprised to find out was the song was originally called “Stack-a-Lee” named after Lee Shelton, an African-American pimp living in St. Louis, Missouri in the late 19th century. He was nicknamed “Stag Lee” because he ‘went “stag”‘, meaning he was without friends. The song was first recorded by Waring’s Pennsylvanians in 1923. Lloyd Price recorded two versions of this song. The first version included a line with Stagger Lee and Billy gambling (Stagger Lee shot Billy at the end). Complaints from radio listeners came about so ABC-Paramount had Lloyd Price record version which has  Stagger Lee and Billy arguing over a girlfriend instead of gambling.

“Creep”, the debut single by the English alternative rock band Radiohead has had lyrical changes to comply with radio censorship and with the demands of a  live audience.”Creep” is the one single Radiohead is most known for, and because audiences only react to this song and not to their other songs, they stopped playing it from the late 90s until the early 2000s. Lead singer Thom Yorke sings a line that goes, “You’re so f***ing special” on the original album. However, because of censorship complaints, he changed the line into “You’re so very special” for the radio edit version. Yorke then regrets changing the line for the radio edit version, saying it disturbed the “sentiment of the song.” According to him, the song lost its anger as a result. Another line they changed in the verse is “I want a perfect body, I want a perfect soul” to “I want a perfect body, so I can look good next to you”.

Named as the 10th biggest song of all time bu Billboard, “Hey Jude” is one of the greatest songs released by the Beatles. Many would wonder who “Jude” is in the song. It is actually John Leennon’s son Julian Lennon and the song was originally written by Paul McCartney (and credited to Lennon–McCartney) as “Hey Jules”. McCartney wrote the iconic ballad to comfort Lennon’s then 5-year old son Julian, nicknamed “Jules” as his parents, Lennon and Cynthia Powell, were going through a divorce. McCartney decided to change “Jules” into “Jude”, inspired by the character “Jud” in the musical “Oklahoma!”. It wasn’t until Juliam was a teenager that he learned the song was about him and for him. He admitted to Paul that he felt closer to him than his own father as he was growing up

9. Sympathy for the Devil – The Rolling Stones

“Sympathy for the Devil” by The Rolling Stones was written by Mick Jagger and Keith Richards and is always assumed to be attributed to the devil because of the line “call me Lucifer”. It ranked at number 32 on Rolling Stone magazine’s list of 500 Greatest Songs of All Time. In the song’s most memorable lines, the narrator in the song’s monologue shouts “who killed Kennedy?” referring only to John F. Kennedy, assassinated in 1963. That was recorded on June 4th, 1968. However, on June 6, 1958, presidential candidate Robert F. Kennedy was shot in the kitchen of California’s Ambassador Hotel, making it that there were already two Kennedy politicians assassinated in history. Jagger immediately changed his lyrics to I shouted out, ‘Who killed the Kennedys?’ When after all, it was you and me.”