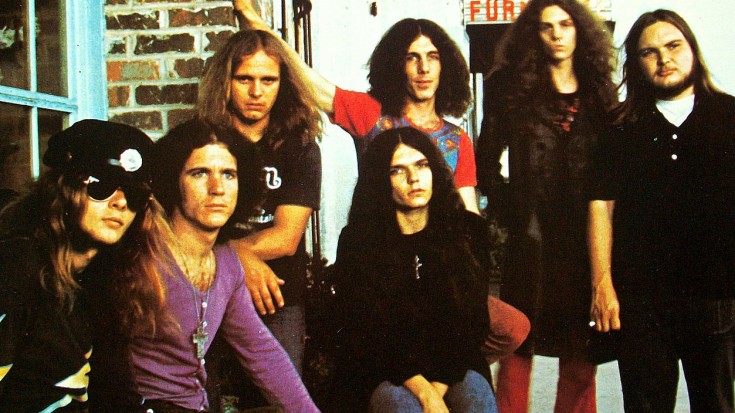 With its distinctive opening guitar lick, feel good sound and catchy chorus, Lynyrd Skynyrd’s Southern rock masterpiece “Sweet Home Alabama” is a foot-stomping good time and every bit as iconic as the band that wrote it, giving rock fans something to sing and dance to and musicians a level of greatness to one day aspire to. Despite being beloved for over 4 decades now, though, there are still a few mysteries that the song reveals only to the most dedicated Skynyrd fans.

Here are 8 of our favorites:

One of the things modern bands could learn from Lynyrd Skynyrd is foresight and the ability to write for future albums while you’re working on your next album. That’s exactly what Lynyrd Skynyrd did when they wrote “Sweet Home Alabama”; written during the Pronounced Leh-Nerd Skin-Nerd sessions in 1973, “Sweet Home Alabama” was briefly considered for the album until the band decided to hold off on it, saving it so that they had a HUGE album opener for their second studio album, Second Helping.

Judging by the fact that it was a tremendous success and an immediate crowd favorite, it looks like Skynyrd’s decision to save it for the next album was a great one!

For the past 4 decades, we’ve all followed Ronnie Van Zant’s directions to “turn it up” to the letter – sorry neighbors! However, that one line in “Sweet Home Alabama” wasn’t even supposed to be there; as the legend goes, Ronnie was having a hard time hearing the track while he was laying down vocals and asked producer Al Kooper and studio engineer Rodney Mills to increase the volume in his headphones so he could hear the track better, and instead of scrapping it, the “turn it up” stayed.

6. It was Lynyrd Skynyrd’s first song to chart

By 1974, Lynyrd Skynyrd had already been a band for well over a decade. They cut their first two singles in 1968 with “Michelle” and “Need My Friends,” had toured with The Who, and were thrown onto the world stage with their first studio album Pronounced Leh-Nerd Skin-Nerd a year earlier, seeing success with their first hit “Gimme Three Steps”; but it wasn’t until October 1974 that Lynyrd Skynyrd made their grand entrance onto Billboard’s charts, with “Sweet Home Alabama” peaking at a whopping #8 on Billboard’s Hot 100 and making it the band’s very first song to chart.

Oh, “Sweet Home Alabama” – what would you be without the chorus of background singers supporting Ronnie Van Zant? For this classic, former Raelettes Clydie King and Merry Clayton (she had a duet with Rolling Stones’ Mick Jagger for Gimme Shelter’ and has also performed with Neil Young, Joe Cocker, Carole King and Linda Ronstadt) were recruited to sing backup on “Sweet Home Alabama,” giving the song a soulful boost with those gospel undertones we’ve come to know and love over the years.

It was the first instance where Lynyrd Skynyrd featured backup singers on songs, and was no doubt a catalyst in their decision to incorporate The Honkettes into the lineup two years later, rounding things out with the addition of Cassie Gaines, Jojo Billingsley and Leslie Hawkins. These days, you can hear the lovely Dale Krantz-Rossington and Carol Chase singing backup on “Sweet Home Alabama” and boy, can those ladies sing!

Despite the years of rumors of a feud between Lynyrd Skynyrd and Canadian singer-songwriter Neil Young, the truth is that not only were these legends friends, they held a healthy respect for each other and were even fans of each others’ work. Shortly after the plane crash that claimed the lives of Ronnie Van Zant, Cassie Gaines and her brother Steve, Neil performed “Sweet Home Alabama” at a memorial for Lynyrd Skynyrd’s fallen as his way of paying tribute to people who weren’t just great musicians, but taught him a lesson in kindness.

In 2012, Young reflected on Lynyrd Skynyrd by writing this in his book Waging Heavy Peace: “My own song ‘Alabama’ richly deserved the shot Lynyrd Skynyrd gave me with their great record. I don’t like my words when I listen to it. They are accusatory and condescending, not fully thought out, and too easy to misconstrue”.

3. Speaking of Neil Young…Is That “Southern Man” We Hear?

A crucial part of Lynyrd Skynyrd’s legacy, producer Al Kooper was as much a part of the band as anyone could hope to be. More than just a producer, Al’s influence on Lynyrd Skynyrd went as far as even playing with the band, playing organ and guitar on select tracks and even contributing backing vocals to “Sweet Home Alabama”. If you listen carefully to the line, “Well, I heard Mr. Young sing about her,” immediately following it, someone in the background sings something that sounds a lot like the phrase “Southern Man.”

Some people thought it was a recording of Neil Young, but it was actually Kooper, impersonating Young. In the book Freebirds: The Lynyrd Skynyrd Story, Kooper added: “Hey, you have to be more careful when you write a song now. But I’ll tell you something — Neil Young loved it. That’s true, he told me so to my face.”

Few songs call to mind the memory of sticky summers, sweet tea and simpler times quite like “Sweet Home Alabama” – I’ve never even BEEN to Alabama but when this song plays, for a few brief moments in time I can imagine that I’m actually a native. It’s interesting, then, to realize that not only was “Sweet Home Alabama” not recorded in Alabama, but its three songwriters Ed King, Gary Rossington and Ronnie Van Zant weren’t even from Alabama!

Ronnie and Gary were both born and raised in Jacksonville, Florida while Ed King is a native of Glendale, California. We’re not complaining – somehow, “Sweet Home California” and “Sweet Home Jacksonville” don’t have quite the same ring as “Sweet Home Alabama”! We wouldn’t have it any other way.

1. “Sweet Home Alabama” Came Together In A Dream

“I always sleep with a guitar next to the bed. There are two solos in that song. Both of them came to me note-for-note in a dream,” says Ed. “It’s one of those Southern mystical things you can’t change”.