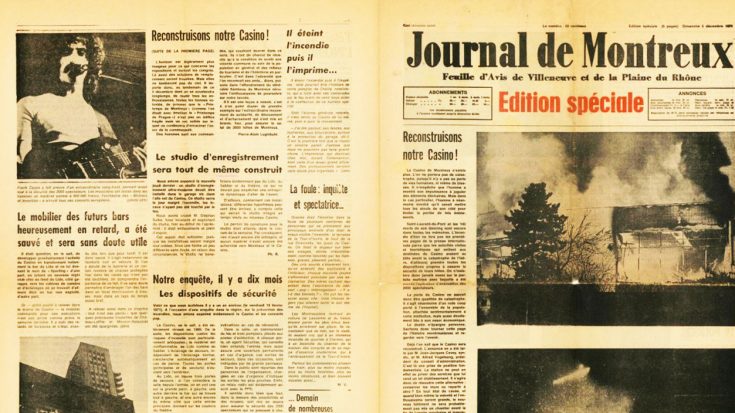 #7 – Frank Zappa And The Concert Fire

It was December 4th, 1971 in a town called Montreux, Switzerland. Frank Zappa And The Mothers Of Invention were set to take to the stage. Bare in mind that this is well before proper security measures were taken at venues. Just over an hour into their set, someone in the audience had shot off a flare gun. The flare would quickly set the old wooden building ablaze.

Luckily, Frank Zappa remained calm and composed during the entire situation and was able to instruct the entire audience safely to the exits and no one was hurt.

Fun fact, this entire incident made the waves rather quickly. One band in particular that saw this was Deep Purple and it inspired them to write the song Smoke On The Water which to this day is still one of the most timeless songs AND guitar riffs of all time. Talk about song inspiration…

While some of these incidents end up being harmless and sometimes even funny in hindsight, there are others that were just destined to be absolute tragedies. December 6th, 1969 was the day that the Altamont Festival took place, and all hell broke lose.

This festival was doomed right from the start. First off, instead of security, members of The Hell’s Angels were employed to do security, second of all the entire concert was free, and thirdly The Hell’s Angels members were paid in beer. This was always going to be a disaster.

During the ongoing of this event, Mick Jagger was punched in the face before he even took to the stage, members of Jefferson Airplane were assaulted, and even more so, four fans had tragically died including one being stabbed at the hands of The Hell’s Angels. The entire night was just a nightmare.

#5 – Steven Tyler Falls Off The Stage

Though this one ended with Steven Tyler getting a bit banged up and leaving him with several injuries, you just can’t help but laugh at it, because it’s basically what he did!

Not too long ago in South Dakota, Aerosmith took to the stage to perform what you could imagine would be an amazing set. The show goes on and it seems as normal as ever, but Steven Tyler would proceed to take one wrong step and fall right the hell off the stage.

Steven Tyler did suffer head, shoulder, and neck injuries and had to postpone their next concert, at the time. Again, those are serious injuries and all, but as you could imagine, Steven Tyler learned to laugh at the whole ordeal and he managed to finish the entire show.

#4 – Axl Rose Jumps Into The Crowd

Now, this is where Axl Rose became infamous for his iconic temperament. Though things nowadays may be a bit different, Axl Rose was always considered to be a bit of a hothead. In July of 1991 in St. Louis, Missouri, Guns ‘N Roses took to the stage to perform a set, but things take an abrupt turn when Axl Rose notices a fan in the crowd that has a camera, and that was a big no no.

Axl Rose quickly tried to order security to quote “Hit that guy and take that away!”. When the security officials were not responding, he said quote “I’ll take it then, Goddammit!”. He then proceeded to jump into the crowd and assault the fan. After the altercation, he got back on stage and said “Due to the lame-ass security, I’m going home!” and slammed the microphone in the ground…. and then a riot broke out, so yea“h.

First of all, before I get into this, I would just like to say that the image right above has got to be one of my favorite images of all time! Keith Moon‘s kit is exploding, Pete Townshend is smashing his gear, and John Entwistle could just care less! Anyway, I digress.

Luckily, no one was hurt, except the poor gear, but that was going to happen regardless right?

#2 – James Hetfield Gets Doused In Flames

At the time, Metallica was touring with Guns ‘N Roses all across the region. During the song Fade To Black, the band was poorly directed on where to stand and what to vigilant of while the pyro effects were happening. When all the pyro started to happen, frontman James Hetfield was a man who was standing in the wrong place in the wrong time.

Metallica obviously had to stop the show and promise the fans that they would return.

Metallica did manage to finish the tour though. James couldn’t play the guitar but he could still sing, so they recruited the help of another guitarist to fill in. This also gave James Hetfield opportunity to showcase his frontman talents and showmanship. So all was well, in the end!

#1 – The Death Of Dimebag Darrell

I hate to end this on a sad note, but this one ranks even to this day as the most tragic on stage incident to ever take place in rock and metal history. A little history. Dimebag Darrell of Pantera quickly became known as one of the best metal guitarists of all time. He was a guitarist that had a style that was often imitated but never duplicated. In 2004 in Ohio, Dimebag Darrell was set to take centerstage when a gunman shot Dimebag Darrel dead. After this, the metal community was never the same again.

Even to this day, Dimebag Darrell is revered as one of the greatest guitarists that has ever lived. He is a guitarist that was aggressively innovative and uniquely prolific. He was gone too soon. He legacy does live on though. To this day, guitarists model their playing after his techniques. That being said, he will be forever missed! RIP Dimebag Darrell!