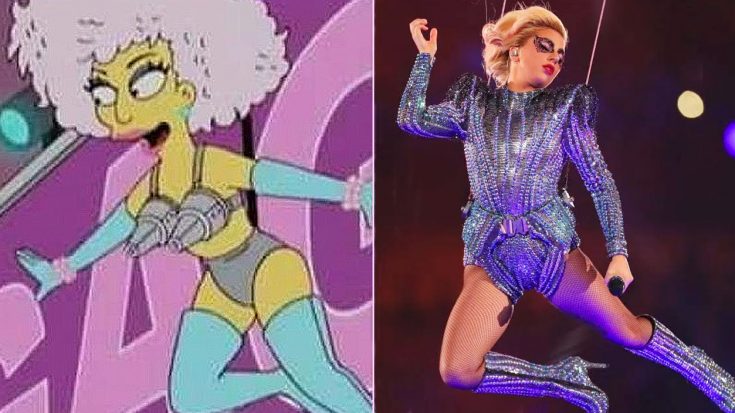 The Internet Goes Gaga For This Uncanny Coincidence

At this point in the game, it would be foolish not to pay attention to The Simpsons when it comes to their ability to predict historical events long before they’ve even occurred. Over the course of 3 decades and over 600 episodes, The Simpsons have predicted it all; from Donald Trump’s presidency to the winner of the 2016 Nobel Prize for economics, the creators behind America’s favorite family added another notch to their belt last night with another accurate prediction in the form of Lady Gaga’s high flying Super Bowl halftime show performance.

In case you missed it, last night saw Gaga descend from the roof of Houston’s NRG Stadium before flying through the air on a wire, making good on her pre-show promise to use “every inch of the stage” and employing the use of pyrotechnics and costume changes to make her vision a reality; however, the stunt was predicted five years ago in episode 508 of The Simpsons when Lady Gaga performed for the citizens of Springfield – while flying through the air while attached to a wire.

Fans of the show immediately recognized the similarities between Gaga’s real life performance and her Simpsons appearance, both laughing and cringing at the show’s uncanny knack for predicting the unpredictable. Is this another case of life imitating art, art imitating life, or just a strange coincidence? We may never know, but take a look at the video anyway – the similarities are pretty startling!