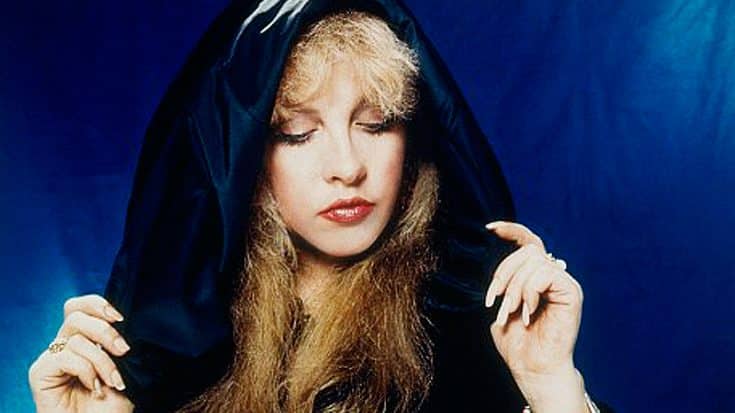 Now when talking about the rock goddess known as Stevie Nicks, one of the many things that’ll come to mind is her name. Not just for obvious reasons, but also because “Stevie” is generally a man’s name… generally. Many of her fans also often associate her with fellow musician and Fleetwood Mac member Lindsey Buckingham. (we’ll get into that) It’s almost as if they’ve switched names or something, but anyway, back to my original point.

Her real name is actually Stephanie Lynn Nicks. She got the nickname “Stevie” when she was just an infant. The story is that when she was small, she couldn’t pronounce her name well, so she would able be able to pronounce it as “Tee-Dee”, hence her getting the nickname, “Stevie“. It’s pretty fascinating to think that something as simple as a mispronunciation could leave such an everlasting mark on rock and roll history. Do you think her nickname suits her?

Stevie Nicks and Lindsey Buckingham were arguably rock and roll’s favorite couple during their on and off romances. The two managed to make the whole world jealous with just how beautiful they were together. With Stevie‘s hypnotizing beauty and Lindsey’s dashing good looks, these two were the perfect match. Unfortunately, they are no longer together, romantically, but here’s a heartwarming fact about the two…

They met during their high school years. Stevie Nicks first saw Lindsey Buckingham while he was performing California Dreamin. Needless to say, she was simply swept away. Soon after, as its well known, the two would become romantically involved in what would be considered one of the best romantic pairings in music history. It’s just truly unfortunate that they have drifted apart…romantically anyway, but luckily, they still write, record, and perform beautiful music together!

#3 – Her Affair With Mick Fleetwood

Okkkkaaaayyyyyy, now I honestly wasn’t aware of this one, myself, but yep, it happened! So let’s talk about it!In late 1977 somewhere in New Zealand, Stevie Nicks and Mick Fleetwood (drummer for Fleetwood Mac) began their ‘affair’. At the time, Stevie Nicks and Lindsey Buckingham weren’t romantically involved, but Mick Fleetwood was married and had children. Shortly after, the two decided to end the affair. Stevie said this regarding the affair

“Never in a million years could you have told me that would happen. Everybody was angry, because Mick was married to a wonderful girl and had two wonderful children. I was horrified. I loved these people. I loved his family. So it couldn’t possibly work out. And it didn’t. I just couldn’t. It would’ve been the end of Fleetwood Mac.”

#2 – She Opened For Jimi Hendrix And Janis Joplin

As if Stevie Nicks needed anymore validation to her illustrious career, she even opened for two legendary rockstars who are no longer with us. Jimi Hendrix and Janis Joplin!

Before Fleetwood Mac, Stevie Nicks and Lindsey Buckingham were in a band called Fritz that were a rock group but were also known for the country flair that Stevie Nicks herself brought to the band.

Stevie Nicks often credits Jimi Hendrix and Janis Joplin for inspiring her on stage theatrics and persona. Just imagine how different Stevie Nicks would be if she hadn’t had the opportunity to open for Jimi Hendrix and Janis Joplin. How different would Fleetwood Mac, or even rock music all together!? It’s always so crazy how small circumstances affect such big outcomes, especially in the realm of rock music, particularly!

When it comes to Stevie Nicks, people like to start Rumours (pun completely intended), but this one is certainly a stretch. Yep, people have circulated rumors that Stevie Nicks practiced witchcraft!

Now, it’s pretty well known that Stevie Nicks is a fan of dark and mysterious outfits and certain things pertaining to witchcraft and whatnot. She has even admitted that she has a high regard for witchcraft, but she slammed the rumors that she was practicing it.

“I have no idea what precipitated those rumors … I am not a witch. Get a life!”

Fun Fact: Stevie Nicks has appeared on American Horror Story as a witch version of her own self, so it’s still kind of hard to imagine her not practicing witchcraft, but whether she does or not, we still love her!