5 Rocked Out Live Performances From Aerosmith’s “Get A Grip” 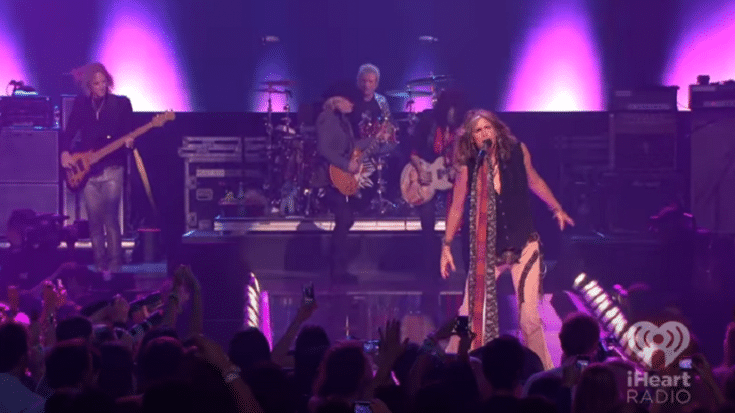 Capitalizing on the success of 1987’s Permanent Vacation and 1989’s Pump, Aerosmith were clearly back in the game. They maintained the momentum with their eleventh studio album Get A Grip which became their best-selling album worldwide. It sold more than 20 million copies and once again proved that though they were now considered veteran rockers, Aerosmith could still rock out with the best of them.

Here are the best live performances from “Get A Grip”:

During the Woodstock Festival in 1994, Aerosmith performed this for their encore. They were supposed to start at midnight but ended up playing at around 3 or 4 AM because of a heavy downpour. Frontman Steven Tyler said that during their performance, “It rained like a cow pissing on a flat rock”. Still, that didn’t stop them from delivering an epic set. He’s clearly in his element, captivating the crowd and killing it on stage. Guitarist Joe Perry also stole the spotlight with his show-stopping solo.

Keep in mind that most of the members were already in their 40s when they embarked on their Get A Grip tour but watching them play, you’d think they were still in their 20s and they could definitely outperform most of the popular bands in the ’90s. Aerosmith’s in top form. No matter what anyone says, they could go from hard rock to power ballads and nail it every time.

Aerosmith were way past their heyday when they played a six-song setlist at the iHeartRadio Music Festival in 2012 but the younger generation of musicians could learn a thing or two from them because the band still had it. Unfortunately, they played in front of an unenthusiastic audience. Truth be told, people nowadays rarely come across a live performance that rivals the studio recording, just watch the video above and you’ll get what we mean.

They kicked off their concert with this but prior to that, no less than Megadeth opened for Aerosmith. The energy and musicianship are off the charts. And Tyler’s basically showing everyone how it’s done. They don’t need over-the-top props or special effects on stage. It’s just them and their music and that’s more than enough.

5. Amazing (Live at the Mega Music Rock Experience in Nijmegen, Netherlands on June 22, 1994)

Aerosmith was on a roll in 1993 and 1994. After releasing Get A Grip, they embarked on an extensive tour all over the globe. This stop in the Netherlands showcased The Bad Boys of Boston at their absolute best. Not just Tyler but the rest of the group – Joe Perry, Joey Kramer, Tom Hamilton, and Brad Whitford – delivered the goods and didn’t disappoint.