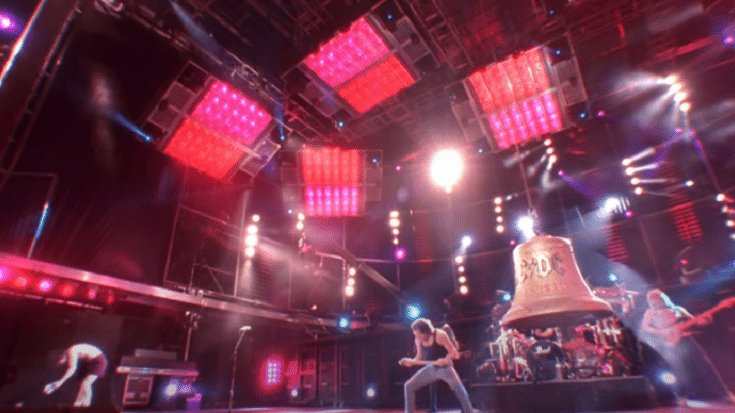 AC/DC is celebrating the 40th anniversary of their seminal album “Back in Black”. It’s their first LP with then-new frontman and singer Brian Johnson and it’s also the record that took them to the top. It served as their tribute to fallen bandmate Bon Scott.

AC/DC brought back hard rock to the forefront and it was glorious. Here are five of the most unforgettable live performances from their “Back in Black” LP.

At this point, AC/DC was still teeming with so much energy and enthusiasm. They were clearly a stellar live act. Brian Johnson’s in top form with his booming and distinctive vocals, hitting the high notes and looking effortlessly at that. He had big shoes to fill but he definitely delivered the goods. Angus Young lets loose and goes all-out while playing those memorable riffs.

It kicks off the album and the bell tolling signaled something ominous as AC/DC tipped their hats to Scott. The two-ton bell has become a fixture in their concerts. During recording, they planned to ring a bell from a nearby church but with the flock of birds living inside it, they ended up recording the fluttering of wings too. In this particular performance, AC/DC members were already veteran rockers but they still have the same energy as they did during their glory days.

This was during the North American leg of their “Flick Of The Switch” Tour. Still at the height of their powers, AC/DC was truly a force of nature and they’re one of the few rock bands whose live performances are better than studio recordings. Angus Young’s a big ball of energy on stage.

It’s one of the few times we’ve seen Brian Johnson performing sans his signature newsboy hat. This stop in Japan was part of their “Back in Black” Tour and AC/DC just released this video a few weeks ago. It’s a memorable song for them since it’s their first single with Johnson and has since become a fan favorite.

Over the years, Johnson’s voice has changed and evolved. It’s still good but in the ’80s, his powerful vocals were unmatched. His delivery did much in taking the entire song to the next level – even more so in a live setting. Just imagine being part of that crowd and listening to this live – it would’ve been an epic experience.