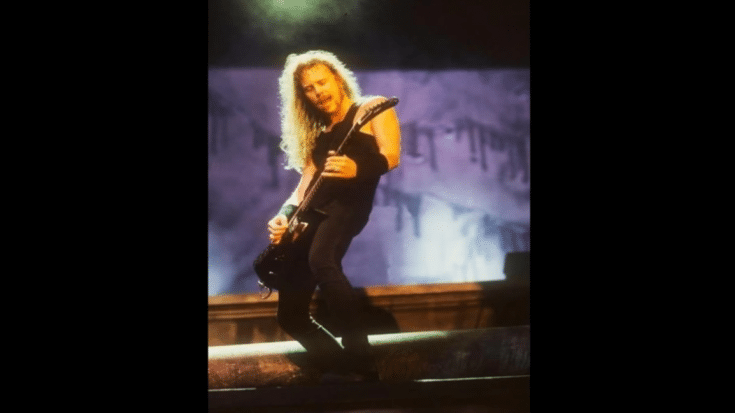 Widely considered as one of the greatest heavy metal guitarists, Kirk Hammett formed his first band Exodus when he was just sixteen years old. But it was when got a call from Metallica to replace Dave Mustaine that he landed the gig of a lifetime. In an interview with Metal Hammer, he shared his first impression of his future bandmates. He revealed, “I’ve said this before and I’ll say it again, but I thought, ‘These guys are great, but they’d be so much better with me.’” And yep, we totally agree.

Here are five isolated guitar tracks that showcase his talent.

The title track of their second studio album, the title was inspired by Stephen King’s book The Stand. Hammett, who was reading it at the time, shared to Rolling Stone: “There was this one passage where this guy was on death row said he was waiting to ‘ride the lightning.’ I remember thinking, ‘Wow, what a great song title.’ I told James (Hetfield, vocals), and it ended up being a song and the album title.”

Their first power ballad, Hammett actually improvised as he played the final solo.

This classic hit evolved from a riff written by Hammett. He told Rolling Stone how he came up with it: “Soundgarden had just put out Louder Than Love. I was trying to capture their attitude toward big, heavy riffs. It was two o’clock in the morning. I put it on tape and didn’t think about it. When [drummer] Lars [Ulrich] heard the riff, he said, ‘That’s really great. But repeat the first part four times.’ It was that suggestion that made it even more hooky.”

One of their most popular and enduring songs, it was so personal to James Hetfield that he initially wanted to keep it to himself and not release it. He told Mojo magazine, “At first I didn’t even want to play it for the guys. I thought that Metallica could only be the four of us. These are songs about destroying things, head banging, bleeding for the crowd, whatever it is, as long as it wasn’t about chicks and fast cars, even though that’s what we liked. The song was about a girlfriend at the time. It turned out to be a pretty big song.” Interestingly, it’s him who played the solo instead of Hammett.

It features a guitar solo by Hammett and a final dual solo section by both Hammett and Hetfield. Hammett told Kerrang! that this has one of his favorite Metallica solos. He shared, “Specifically, this is the middle solo of the song. Much like ‘Enter Sandman’ it’s a solo that everybody can pretty much sing along to, and it definitely gives me a really good feeling every time I play it.”