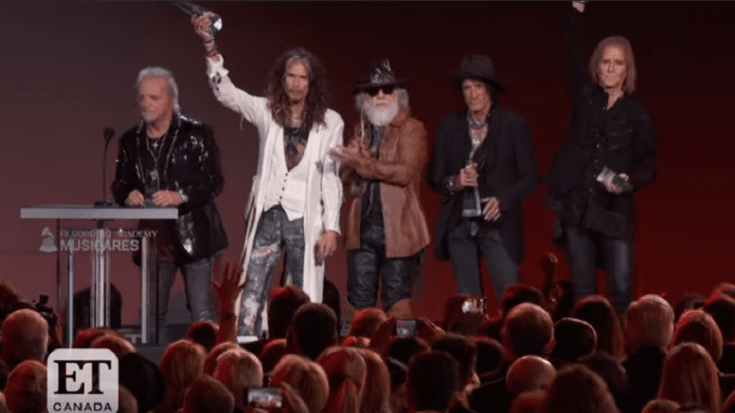 They Continue To Make Headlines

Even with a career spanning almost five decades, Aerosmith continues to be one of the most enduring rock acts. In light of the recent lawsuit drama with drummer Joey Kramer, it only showed that the band has been through a lot – from public feuds with bandmates to health scares. They’ve proven their resiliency over and over again and though they’re no longer in their heyday, they not only boast of a loyal following but they continue to wow the younger generation.

Here are five recent facts about them.

5. Joe Perry performed at the 58th Grammy Awards on February 15, 2016 with Hollywood Vampires.

In 2015, Joe Perry formed Hollywood Vampires along with Alice Cooper and Johnny Depp. Their Grammy performance was a tribute to Lemmy Kilmister who died on December 28, 2015.

4. Steven Tyler released his debut solo studio album, “We’re All Somebody from Somewhere.”

It was a cause of tension between Tyler and his bandmates when he went country. Asked about his opinion on the single “Red, White, and You”, Perry told USA Today: “Hey, if I didn’t know him when I heard the song I’d go, ‘It’s okay, next.’ I’m not going to say anything else about that.”

3. Aerosmith played at smaller venues during their Blue Army Tour.

They kicked it off on June 10, 2015 at San Diego and wrapped it up on August 7 at Canton before they headed off to Moscow for a September 5 show. Their venues were a mix of large and small ones – and they went to places they’ve never been to before. And they also dusted off several deep cuts during the trek.

He collapsed on stage and had to be rushed to the Coney Island Hospital before he was transferred to Columbia Presbyterian Hospital. A few hours later, he was in a stable condition.

On the most recent update about Kramer and his bandmates, he’s apparently “practicing to get his skills back to where they were before his absence, and once Kramer proves he’s up to the task … the fellas will let him back in to start beating the skins again.” This is according to gossip site TMZ. We’ll just have to wait and see if he gets to play with them this year.