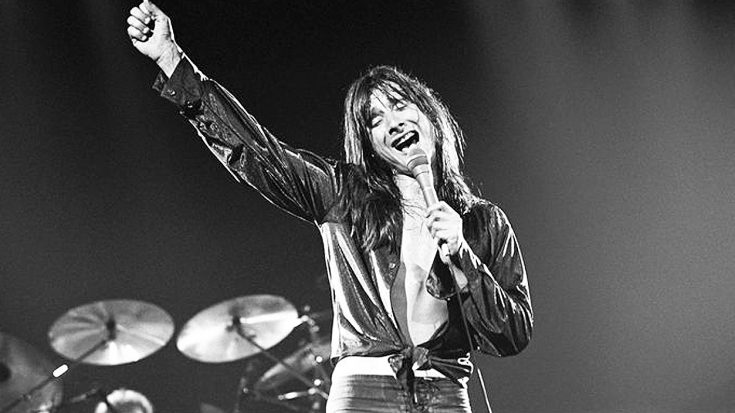 5. He had played in other bands before Journey!

Prior to becoming the face of pop-rock superstars Journey, Steve Perry fronted two other bands. He collaborated with musician/artist/composer/producer Scott Mathews in his early days, and the two formed a band called Ice. Before he landed the gig with Journey, Perry moved to California and had a brief stint with a band called Alien Project. Unfortunately the bassist of the band, Richard Michaels, was killed in a car crash, evidently ending the band, and almost convincing Perry to quit music all together.

4. His solo album was a major success!

In 1984 Perry released his first solo album titled Street Talk. Even though the album was released while he was still touring with Journey, it achieved major commercial success! The album is certified double platinum, and had numerous songs top the Billboard charts, including “Oh Sherrie” which rose all the way up to #3 on the charts! There are many references to his first band Alien Project throughout the album. In fact, the album is dedicated to Richard Michaels, the bassist for Alien Project who lost his life in a car crash.

Following his successful debut solo album, Perry followed it up with a second album in 1994 with the release of For the Love of Strange Medicine. This album was released after Journey went on hiatus in 1987, and could technically be considered Perry’s 3rd solo album. Perry wrote an recorded a follow up to Street Talk in 1988, but the album was subsequently shelved. Perry then went on to record For the Love of Strange Medicine, which included a track that held a special place in Perry’s heart. The track “Young Hearts Forever“ was written in homage to Thin Lizzy bassist Phil Lynott, who died of drug use in 1986.

2. Perry had to alter some of the lyrics in the song “Lights”

One of Journey’s most popular songs had to undergo a slight makeover before release. The band’s hit “Lights” was originally written about Los Angeles. Perry claims that the opening line originally read: “When the lights go down in the city/And the sun shines on LA.” Perry then sat down and thought about the lyrics, and decided to alter them to pay homage to the band’s San Francisco/Bay Area origin. Therefore he changed “LA” to “The bay,” which made more sense and sounded a lot more natural.

Throughout the rock n’ roll world, Perry has become known by his nickname “The Voice.” Many have argued that next to Freddie Mercury, Perry’s voice is the best in rock history. They aren’t necessarily wrong. Even his peers have regarded him as the best of the best, and have given him the nickname “The Voice.” The nickname was originally given to Perry by Jon Bon Jovi. Even record producer and former American Idol judge Randy Jackson said that Perry had “the golden voice,” Queen’s Brian May siad his voice is “one in a million.” We can’t argue against any of them. He truly is the best!