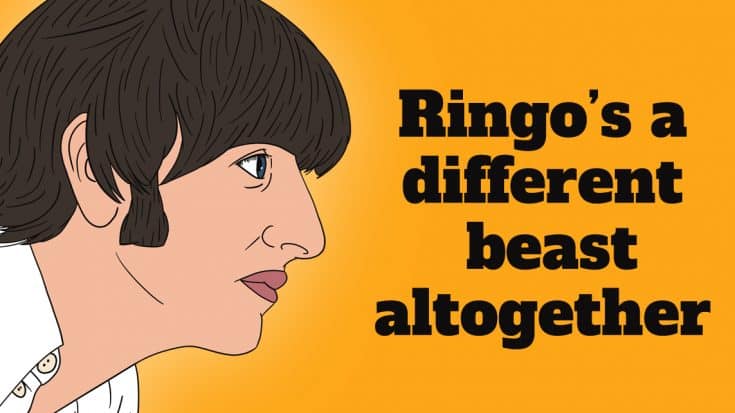 Ringo Starr is often the butt of several jokes but he has remained triumphant against the haters since he’s still active in the music industry and his net worth is north of $300 million. Some may make fun of his drumming but keep in mind that he was integral to The Beatles’ sound. He was never flashy nor wild behind the kit but he suited the band and their music perfectly.

As proof of his brilliance, here are five isolated drum tracks that will make you appreciate his drumming more.

She Said, She Said

Famously inspired by an LSD-fueled conversation between John Lennon and actor Peter Fonda, it was the final track the band recorded for Revolver. Although mainly written by Lennon, he had some help from George Harrison. And according to Paul McCartney, “John brought it in pretty much finished, I think. I’m not sure but I think it was one of the only Beatle records I never played on. I think we’d had a barney or something and I said, ‘Oh, fuck you!’ and they said, ‘Well, we’ll do it.’ I think George played bass.”

One of the highlights of the Help! film, it became a staple in The Beatles’ live repertoire starting in 1965. Lennon admitted, “‘Ticket To Ride’ was slightly a new sound at the time. It was pretty fucking heavy for then, if you go and look in the charts for what other music people were making. You hear it now and it doesn’t sound too bad; but it’d make me cringe. If you give me the A track and I remix it, I’ll show you what it is really, but you can hear it there. It’s a heavy record and the drums are heavy too. That’s why I like it.”

Considered by fans as their finest B-side, the song’s heavily influenced by LSD. It showcased Starr’s drumming which became the track’s key feature. Starr himself was impressed with his performance. He recalled, “I think I just played amazing. I was into the snare and the hi-hat. I think it was the first time I used this trick of starting a break by hitting the hi-hat first instead of going directly to a drum off the hi-hat.”

Lennon called it “a funky record” and revealed that it’s “one of my favorite Beatle tracks”. Originally written for Timothy Leary’s campaign, Leary was charged and jailed for cannabis possession so Lennon took the song and recorded it with The Beatles. Lennon shared, “‘Come Together’ changed at a session. We said, ‘Let’s slow it down. Let’s do this to it, let’s do that to it,’ and it ends up however it comes out. I just said, ‘Look, I’ve got no arrangement for you, but you know how I want it.’ I think that’s partly because we’ve played together a long time. So I said, ‘Give me something funky,’ and set up a beat, maybe, and they all just join in.”

George Harrison’s crowning achievement, he wrote it during the White Album sessions. He said, “I had written ‘Something’ on the piano during the recording of the White Album. There was a period during that album when we were all in different studios doing different things trying to get it finished, and I used to take some time out. So I went into an empty studio and wrote ‘Something’.”