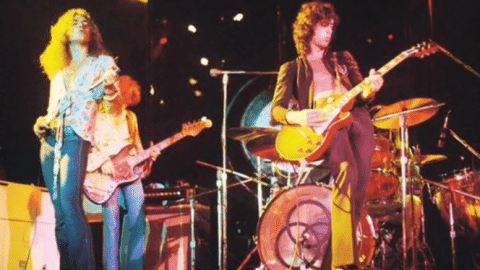 Even among the most ardent fans of Led Zeppelin, they would argue that Stairway to Heaven is neither the greatest nor the definitive track of the band. And that’s true because they have so many songs in their catalog that showcase their virtuosity and brilliance – one of which is Kashmir. Featured on Physical Graffiti, it was a concert staple and a fan favorite.

1. Even the band members agree this was one of their crowning achievements.

Robert Plant declared that it was “One of my favorites… it was so positive, lyrically.” When asked about “the greatest Zeppelin riff of all”, Jimmy Page cited Kashmir.

2. It was originally called “Driving To Kashmir.”

Plant came up with the song while driving through the Sahara Desert. “‘Kashmir’ came from a trip Jimmy and me made down the Moroccan Atlantic coast, from Agadir down to Sidi Ifni,” Plant recalled. “We were just the same as the other hippies really.”

3. Plant liked it more than Stairway to Heaven.

“I wish we were remembered for Kashmir more than Stairway To Heaven,” Plant told Classic Rock magazine. “It’s so right; there’s nothing overblown, no vocal hysterics. Perfect Zeppelin.”

4. It’s one of their few songs that featured outside musicians.

“I knew that this wasn’t just something guitar-based,” Page explained to Rolling Stone. “All of the guitar parts would be on there. But the orchestra needed to sit there, reflecting those other parts, doing what the guitars were but with the colors of a symphony.”