5 Facts About AC/DC That’ll Stun Even Their Biggest Fans! 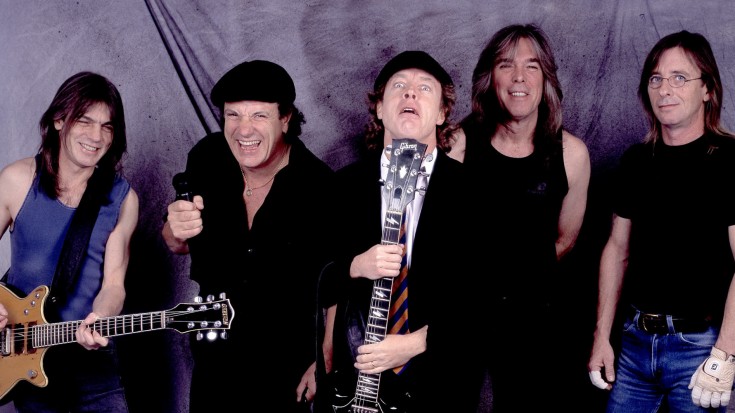 It’s safe to say that most people nowadays don’t even know what “AC/DC” actually means. We only know it as the name of the iconic rock band. It’s a cool name for a band. It’s simple, effective, and straight to the point, but what what you may not know is where they got this name.

According to Angus Young, their sister Margaret had a sewing machine and on the back of it read the four letter phrase “AC/DC” and the rest is history.

It’s actually quite funny where some of the most iconic things originate from, AC/DC included. Just think what history would’ve been if Margaret Young hadn’t bought that sewing machine. Maybe AC/DC would’ve gone under a different name and been just as successful, or maybe without the motivation of a cool band name, Angus Young would’ve never been motivated to form the band and AC/DC would’ve NEVER formed! It’s amazing what kind of power one sewing machine can hold!

In the earliest of stages of AC/DC, Angus Young was unsure of how he should present himself on stage. He could’ve gone with the same look as his other band members, but Angus truly wanted to stand out. So, to ensure this, Angus decided the best way to stand out was to wear a distinctive outfit on stage.

When going about this, Angus had a few different choices for outfits and they were *drumroll*… Spider-Man, a Gorilla, Zoro, a School Boy, or Superman! Guess which one he chose!

Angus Young is arguably the only grown man in the world that can wear an old school boy uniform and still be cool. The look has become iconic and is his defining trait! It’s pretty much the only thing in the world that’ll make you think school is cool again!

Again, imagine what history would be like if Angus has went with a gorilla, or Zoro instead of the school boy look! Can you imagine thousands of people attending an AC/DC concert wearing dressed as Zoro or gorilla costumes? It’s an unsettling thought. Let’s just be glad Angus chose the school boy uniform!

Bon Scott is beloved and missed by all AC/DC fans to this very day. His voice can essentially still be heard today. Bon Scott was charismatic, energetic, and captivating!

Though he is regarded as the ORIGINAL AC/DC singer, many people do not know that even Bon Scott wasn’t their original singer… technically.

#2 – ‘Dirty Deeds Done Dirt Cheap’ Was Written About A Cartoon!

Going back to what was said about how the origins of of history’s most iconic things can be something as simple as a sewing machine. The origins of one of AC/DC’s most iconic songs ‘Dirty Deeds Done Dirt Cheap’ is no different, apparently! As it turns out, this amazing song was written about the simplest of things… Angus Young’s favorite childhood cartoon, ‘Beany & Cecil’!

‘Dirty Deeds Done Dirt Cheap’ was written and recorded in 1976 and quickly became an instant classic. It’s the song that confirmed AC/DC’s iconic hard rocking style, but the truly baffling truth behind this song is that it was written about a cartoon!

‘Beany & Cecil’ was a cartoon that aired from 1962 to 1969. It was universally beloved by fans and viewers alike, and apparently also by Angus Young. This cartoon gave Angus Young the inspiration to write ‘Dirty Deeds Done Dirt Cheap’. Us fans can truly be grateful to this simple cartoon! It was because of this cartoon we have ‘Dirty Deeds Done Dirt Cheap’. Thank you ‘Beany & Cecil’! You are officially a part of hard rock history!

#1 – Brian Johnson Used To Be A Soft Rock Singer!

The man, the myth, the legend Brian Johnson is a juggernaut amongst his peers in the world of hard rock vocals. He is the only man in the world who can wear a newsboy cap and still look cool. He has a razor sharp voice that is PERFECT for AC/DC.

Now obviously AC/DC couldn’t’ve been Brian Johnson‘s first band, it just wouldn’t come as any surprise, but could you imagine Brian Johnson being a soft rock singer? Well… it’s true!