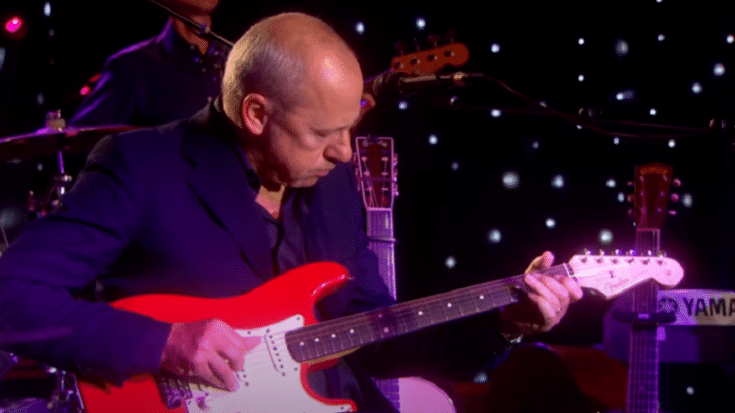 Mark Knopfler has one of the most interesting careers in rock. He’s the co-founder, lead guitarist, and singer-songwriter of Dire Straits. They had a string of hits but ended up disbanding less than two decades after their formation. After which, Knopfler pursued a successful solo career. He’s a left-handed virtuoso who plays the guitar right-handed.

In a 2019 interview with Anthony Mason, the legendary rocker shared that music is “a bit of an obsession.” He also said, “I have a style which is probably all wrong. It would be a guitar teacher’s nightmare. I hold a guitar like a plumber holds a hammer.”

Here are his five best songs both as a member of Dire Straits and as a solo artist.

Written by Knopfler, it was featured on their eponymous debut album as their first single. He composed it on a National Steel guitar and initially thought it was dull. In 1977, he bought his first Stratocaster which became a game-changer for him. He said, “It just came alive as soon as I played it on that ’61 Strat … the new chord changes just presented themselves and fell into place.” Knopfler drew inspiration from a jazz band playing in a pub called Sultans of Swing and Knopfler found it funny because such a name didn’t suit the mediocre band.

The closing and title track to Dire Straits’ fifth studio album, Knofpler wrote it during the ten-week Falklands War. It’s an anti-war song, describing the experiences of soldiers in times of war particularly about a soldier dying in the battlefield. Instead of his Fender “Stratocaster”, Knopfler used a Gibson Les Paul Standard guitar. He said, “We’ve got just one world but we live in different ones. It’s just stupid, it really is. We’re just foolish to take part in anybody’s war.”

The title track to his second solo studio album, it features singer-songwriter James Taylor. Drawing inspiration from a 1997 postmodernist novel by Thomas Pynchon titled “Mason & Dixon”, Knopfler sang the parts for Dixon while Taylor “played” Mason. Knopfler said, “James had asked if I’d produce him. We had a couple of chats and it occurred to me that he would be really ideal to play this part, if you like. With James’ folk background I thought he could play Charlie Mason really well.”

Like the rest of the songs of his third solo studio album, it’s about working class dignity. It leans toward folk and is both charming and unassuming. More than anything, it showcased his versatility as a musician. He can go from hard rock numbers to something slower and quieter and the result will always be superb.

Incredibly addicting, Knopfler’s guitar work is impeccable. Paying tribute to the city of Edinburgh, Scotland, it’s a standout in his catalog. It’s the first single from “Sailing to Philadelphia” and has an additional verse for the extended version which he released in Mexico. The instrumental portion was used as the theme music for the Canadian radio program Dispatches.