45 Years Ago: George Harrison & Eric Clapton Bring The House DOWN With A Beatles Classic 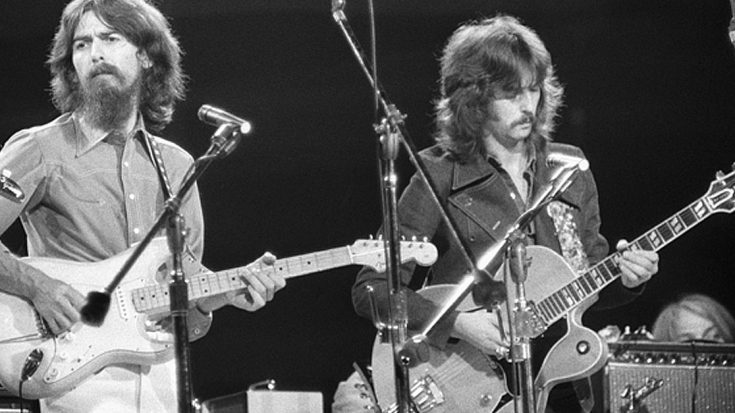 While a proper Beatles reunion never happened, we did get a few amazing near-misses – including this gorgeous performance! Just one year after The Beatles signed the paperwork that dissolved one of the greatest rock bands of the 20th century, former Beatle George Harrison joined forces with late sitar master Ravi Shankar to orchestra The Concert for Bangladesh, two benefit concerts organized to raise international awareness and fund relief efforts for refugees from Bangladesh. He enlisted the help of former bandmate Ringo Starr to fill in on drums for the two show affair and that of very special guest Eric Clapton who despite being in the throes of a heroin addiction and a self imposed break from performing immediately jumped at the chance to help his friend, leading to one of the greatest performances of “While My Guitar Gently Weeps” that we’ve ever seen – short of The Beatles performing it, of course!

Fun Fact: Sales of the live album and DVD release of the film continue to benefit the George Harrison Fund for UNICEF.

For nearly 5 minutes, George takes the lead on “While My Guitar Gently Weeps” while sporting a white Fender Stratocaster, supported by Clapton who stands off towards Ringo’s drum set and delivers the song’s melody in a gorgeous, warm tone provided by his hollow body Gibson Byrdland before giving way to the guitar solo at 1:45. The real rock and roll moment, however, comes when he jumps back into the solo at 3:10, this time joined by George for a good old fashioned lick trading session for the song’s outro but be warned – that’s one clip you’re sure to want to watch over and over again!