4-Year-Old Nails Drums And Vocals With Dad, And It’s Priceless 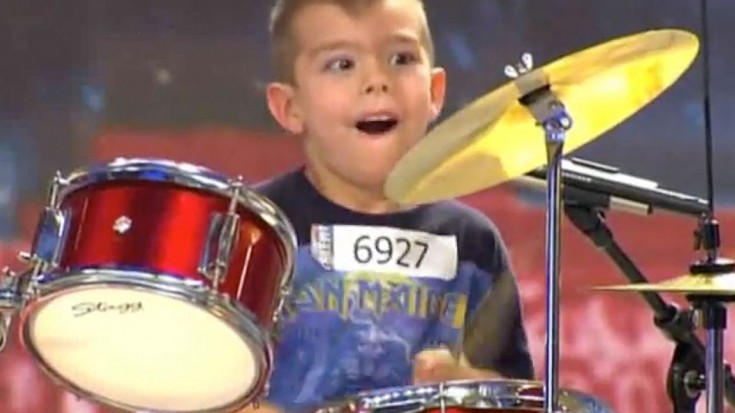 4- year- old Lenny Damijanic wowed judges and the audience with his awesome drum skills and even adorable voice on Croatia’s Supertalent show and it’s the most precious thing we have ever seen.

Rocking out to AC/DC hit “Highway To Hell” with his own dad on guitar, little Lenny totally nails it! Although the video is in Croatian and there are no English subtitles, you don’t need them to see that this kid can play!

“Don’t need reason, don’t need rhyme, ain’t nothing I would rather do, going down, party time…”

Nothing is more awesome than seeing such a young and impressionable child rock an instrument like the drums or guitar! It gives hope to all those that doubt their abilities in this world and inspire others to follow their dreams. Lenny is nothing more than an inspiration!

Interesting Fact: “Highway To Hell” was the first AC/DC song to chart in the US. It helped drive huge sales for the Highway To Hell album, which has sold over seven million copies in America.

Go Lenny! If you’re this awesome at 4, who knows what you will be able to do in the future!!

Living easy, living free
Season ticket on a one-way ride
Asking nothing, leave me be
Taking everything in my stride
Don’t need reason, don’t need rhyme
Ain’t nothing I would rather do
Going down, party time
My friends are gonna be there too

I’m on the highway to hell

No stop signs, speed limit
Nobody’s gonna slow me down
Like a wheel, gonna spin it
Nobody’s gonna mess me round
Hey Satan, paid my dues
Playing in a rocking band
Hey Momma, look at me
I’m on my way to the promised land

I’m on the highway to hell
(Don’t stop me)

And I’m going down, all the way down
I’m on the highway to hell