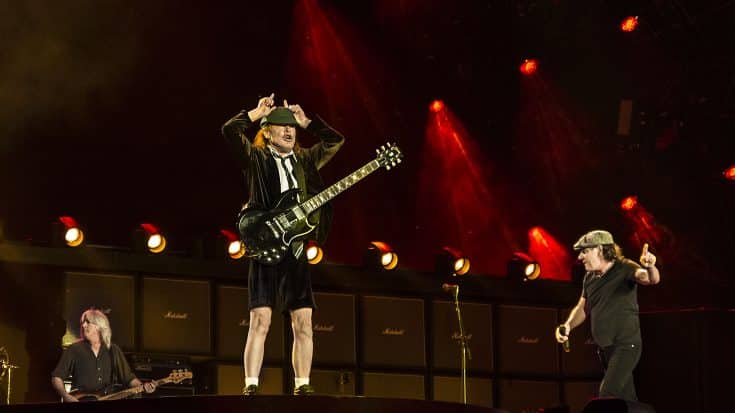 Let’s take a recap of the 35 rock albums turning 35 this year. Arranged chronologically by release date, here you can find some of the all-time favorites and those undiscovered treasures of the past.

AC/DC, Blow Up Your Video (Jan. 18, 1988)
This album garnered a Grammy nomination and more than a million copies were sold. “It was the best thing we’ve recorded for a while,” said the band.

Megadeth, So Far, So Good… So What? (Jan. 19, 1988)
This was Megadeth’s third studio album which was described by many as having a more polished tone despite receiving minimal backing from commercial radio.

Robert Plant, Now and Zen (Feb. 29, 1988)
It was considered the biggest album of Plant’s career. The album Now and Zen peaked at No. 6 on the Billboard 200 and sold more than 3 million copies in the US.

Talking Heads, Naked (March 15, 1988)
The album was created during impromptu jam sessions in Paris and features guests like singer Kirsty MacColl and former Smiths guitarist Johnny Marr. It had a mediocre amount of success at first then went gold and peaked at number 20 in the US. Soon after, the band went on a hiatus before breaking up for good in 1991.

Neil Young and the Bluenotes, This Note’s for You (April 11, 1988)
The music video for the album’s lead single became famous for making fun of Genesis, Michael Jackson, and other artists who participated in or licensed their music for commercials.

Scorpions, Savage Amusement (April 16, 1988)
This album reached its highest point at No. 5 on the Billboard 200 and immediately achieved platinum status through its lead song “Rhythm of Love” which peaked at No. 6 on the Hot Mainstream Rock Tracks chart.

Frehley, Comet Second Sighting (May 24, 1988)
The album peaked at No. 81 on the Billboard 200 and then soon after, the former Kiss guitarist disbanded the band.

Queensryche, Operation: Mindcrime (May 3, 1988)
Through the help of this album, the band was able to reach their commercial breakthrough with their third album.

Living Colour, Vivid (May 3, 1988)
This album reached No. 6 on the Billboard 200 and sold over 2 million copies. It even gave the band a Grammy Award for Best Hard Rock Performance in 1990 through the song “Cult of Personality.”

Poison, Open Up and Say…Ahh! (May 3, 1988)
This album became Poison’s biggest album to date. Notably, it peaked at No. 2 on the charts and sold approximately 5 million copies.

Prince, Lovesexy (May 10, 1988)
In this album that Prince has worked with alone, he carried one song from The Black Album, “When 2 R in Love.”

Judas Priest, Ram It Down (May 13, 1988)
This album made several fans and critics unimpressed. Ram It Down also marked the last album made with longtime drummer Dave Holland and producer Tom Allom.

Van Halen, OU812 (May 20, 1988)
It marked Sammy Hagar’s second album with the band and was noted as their second consecutive U.S. chart-topper. Rumors surrounding the title said that it was a response to David Lee Roth’s Eat ‘Em and Smile, though Hagar has said otherwise.

Rod Stewart, Out of Order (May 23, 1988)
This album was a collaboration with the supergroup Power Station and has sold 2 million copies.

Joan Jett and the Blackhearts, Up Your Alley (May 23, 1988)
One of its tracks, “I Hate Myself for Loving You,” became a Top 10 hit for the group and secured a Grammy nomination for Best Rock Performance by a Duo or Group With Vocal.

Bob Dylan, Down in the Groove (May 30, 1988)
Eric Clapton, Jerry Garcia, and Mark Knopfler are some of the guests on this star-studded album. It was also remarkable since it peaked at No. 61 on the Billboard 200.

Jimmy Page, Outrider (June 19, 1988)
After the disbandment of his supergroup, Firm, Jimmy Page made his official solo debut with this album.

Elton John, Reg Strikes Back (June 24, 1988)
This was Elton John’s first studio recording after his throat surgery. His efforts were not wasted as it spawned two Top 20 hits.

Slayer, South of Heaven (July 5, 1988)
In this album, Slayer can be witnessed making several stylistic shifts, incorporating clean guitars, mellower vocals, and slower tempos. Luckily, their fans eventually get the hang of it and learned to embrace this style.

Jane’s Addiction, Nothing’s Shocking (Aug. 23, 1988)
Although the album generated controversy for its cover and its second single, “Mountain Song,” this album includes the band’s biggest songs which they are known for.

Metallica, …And Justice for All (Sept. 7, 1988)
This 1986 album gave Metallica a Grammy nomination for Best Hard Rock/Metal Performance Vocal or Instrumental in 1989. However, it did not win against Jethro Tull. Despite that, the band bounced back in 1990 and eventually won their first-ever Grammy Award for Best Metal Performance.

Keith Richards, Talk is Cheap (Oct. 3, 1988)
In the midst of Richards’ falling out with Rolling Stones bandmate Mick Jagger, this solo debut album came. He was able to create Talk is Cheap with the help of drummer/producer Steve Jordan, who also helped Richards in terms of writing and recording as well.

Traveling Wilburys, The Traveling Wilburys Vol. 1 (Oct. 25, 1988)
George Harrison, Bob Dylan, Tom Petty, Roy Orbison, and Jeff Lynne are some of the big artists who collaborated on this volume making it the band’s most star-studded album and in supergroup history in general.

Soundgarden, Ultramega OK (Oct. 31, 1988)
This album did better than expected for giving the band its first international tour and earned a Grammy nomination for Best Metal Performance.

R.E.M., Green (Nov. 7, 1988)
The band stuck with its indie spirit by showcasing new chord structures and instruments as they wrote songs for this album. Successfully, the album went double platinum and spawned the Top 10 hit with its “Stand.”