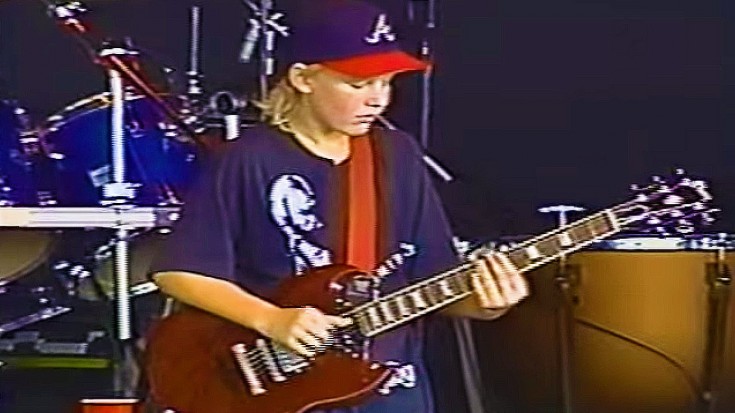 Where most teen guitarists grew up jamming in their local music shops and dreaming of one day rocking their high school talent shows, Grammy Award winning guitarist Derek Trucks earned his stripes playing with The Allman Brothers Band, eventually joining the band as a permanent member in 1999. A child prodigy who played his first paid gig at 11, Derek received the chance of a lifetime when he opened for The Allman Brothers Band during a July 4, 1993 performance in Raleigh, North Carolina; to the delight of the crowd, Derek launched into a soulful spin on Derek And The Dominos’ 1972 classic “Layla” and with his gold slide on his ring finger, long blond hair and Gibson SG no doubt reminded them of late Allman Brothers Band guitar legend Duane Allman.

Fun Fact: His musical style encompasses several genres and he has twice appeared on Rolling Stone’s list of 100 Greatest Guitarists of All Time.

We’ve seen Derek play to crowds two and three times the size of the one in this footage and go on to reach critical acclaim both with The Derek Trucks Band and the Tedeschi Trucks Band but somehow, this means so much more – this is the moment the torch was passed to the next generation and thankfully, we’re able to witness one of the single most defining moments of Derek’s career!