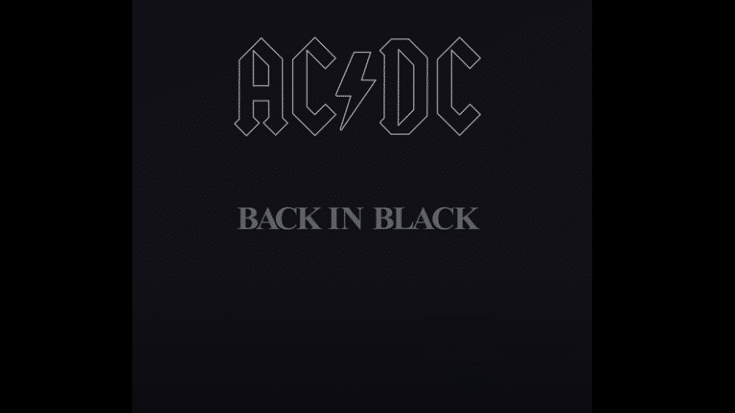 AC/DC achieved legendary status with the release of their seminal album “Back in Black”. Thanks to their previous releases, they were poised for international success but with the death of frontman and lead singer Bon Scott, the band was thrown off course and even briefly considered breaking up. Good thing their friends and family, particularly Scott’s parents’, urged them to continue. Brian Johnson filled in for Scott and well, the rest is history.

It’s been forty years since this mammoth record was released and yet it has aged well. Here are twenty reasons why we still love this album and will never ever get tired of putting it on repeat.

1. “Back in Black” was one of the most powerful and stunning comebacks of all time.

2. The all-black album cover was their “sign of mourning” for Bon Scott. Atlantic Records didn’t like it so they compromised by adding a grey outline around the title and AC/DC logo.

3. It was a massive commercial success – selling 25 million copies in the US and alone and over 50 million worldwide.

4. The LP helped introduce metal to a new generation of listeners.

5. Interestingly, even though it spent over 130 weeks on the US Billboard 200, it never topped the charts and only peaked at #4.

6. Thanks to success of “Back in Black”, their previous releases “Highway to Hell”, “If You Want Blood You’ve Got It”, and “Let There Be Rock” all re-entered the British charts. The last band with four LPs on the British Top 100 was The Beatles.

7. They had difficulties during recording at Compass Point Studios in Nassau, in the Bahamas. When they arrived, tropical storms hit thereby affecting the electricity. Brian Johnson said, “It was hardly any kind of studio, we were in these little concrete cells, comfy mind, you had a bed and a chair. And this big old black lady ran the whole place. Oh, she was fearsome, she ruled that place with a rod of iron. We had to lock the doors at night because she’d warned us about these Haitians who’d come down at night and rob the place. So she bought us all these six-foot fishing spears to keep at the fucking door! It was a bit of a stretch from Newcastle, I can tell you.”

8. Crabs often wandered into the studios too and when they trying to record the sound of bells from nearby church, they were bothered by birds.

9. Because they couldn’t properly record the chimes of bells, they had their own bell made.

10. The two-ton bell wasn’t just used in recording, it also became a fixture in AC/DC concerts.

11. The entire album was a tribute to Bon Scott and so it was fitting to kick it off with a bell toll which set the ominous tone.

12. It wouldn’t be an AC/DC record without double entendres all throughout.

14. On “What Do You Do for Money Honey”, bassist Cliff Williams does a single-note bassline.

15. On the title track, Angus Young cements his spot as a force of nature in the guitar with a tasteful and unforgettable guitar solo.

17. Alternative rock band Veruca Salt referenced “You Shook Me All Night Long” by using the phrase “American thighs” as the title to their debut studio album.

19. Brian Johnson didn’t try to imitate Bon Scott, instead he tipped his hat to his predecessor. Angus Young told Kerrang!, “And then, again, there’s a different character, different style for your songs. Whereas Bon sings the lyric side of things, the difference with Brian was that it was more of a high screaming kind of style, so you had to kind of change and you’d be experimenting with the best way to get him into where everyone felt comfortable with it.”

20. “Back in Black” turned AC/DC into global superstars and they’ve influenced countless other musicians including Guns N’ Roses and Metallica.