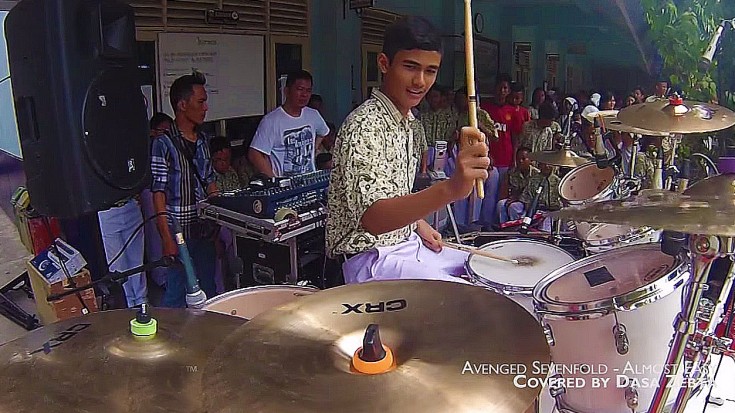 So while Avenged Sevenfold isn’t exactly a metal band, it still makes us smile to see kids getting out of their bedrooms, putting away the video game controllers and jamming to music that inspires them. At 13, Indonesian teen Dasa Zebta did just that when he picked up his drumsticks at school and began to jam Avenged Sevenfold’s ‘Almost Easy’ from their 2007 self-entitled album, and honestly…it’s pretty amazing! He sounds remarkably like the band’s late drummer Jimmy “The Rev” Sullivan, even going so far as to nail what Sullivan affectionately named “the double ride thing”; a complicated drum fill relying on double ride cymbals.

Dasa is only 13, but to see his progression from his earlier videos where he’s visibly stumbling to this video where he makes it look nearly effortless is a pretty strong indicator that he’s bound for a really fantastic future. Wherever Jimmy Sullivan is, we have no doubt that he’s absolutely thrilled by this killer cover!