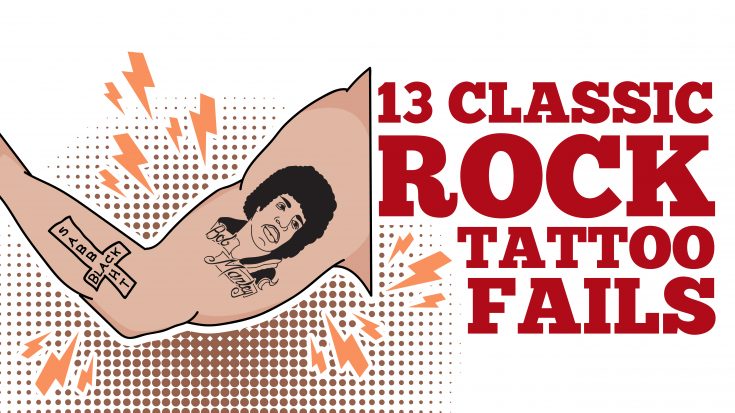 Warning: You’re about to see something that will leave you in tears.

If there’s a gathering of all the creative minds in the world, those who did these tattoos were clearly on the other side. There are five stages of grieving so we badly hope, they have already accepted their fate:

He ain’t gonna live forever but this tattoo will. We’re not sure if this guy made a bet while he was drunk or a friend inked him as a prank. And the absolute horror of it all is if he actually paid to have this tattoo. No disrespect to the artist but maybe you know, it’s time for a change of career because it’s obviously not working out so well with him. Our hearts go out to this man whose bad life choices will forever be branded on his body LITERALLY. Sorry, man. There’s no gentle way of saying it.

We usually sympathize with these ink fails, but we’re currently at a loss for words. In the meantime, we certainly hope you’re not currently drinking your cup of coffee because chances are, you’ll either choke on it or spit it out. We really don’t know what to make of this kind of atrocity. How dare you? That doesn’t even remotely resemble Freddie Mercury. You should see our ‘WTF?’ face right now. We bet whoever made this couldn’t stop laughing up until this day. To the one whose skin this tattoo was inked, you can never break free. It’s okay to cry.

The resemblance is uncanny…. or not. We can smell the guy’s regret all the way here. It’s like a poorly drawn caricature of AC/DC’s legendary member. How can any artist get away with this? Did this tattoo cost 5 bucks? We have so many questions, all of which will remain unanswered. Angus Young’s ‘face’ says it all – we’ve never seen a sadder image. This is a lot like buying your favorite ice cream and seeing the whole scoop fall to the ground. What else can we say? Angus didn’t deserve this. This is a dirty deed, it’s done dirt cheap.

You know, it’s one of those times when Google will come in handy. But hey, at least the artist didn’t mistake him for Che Guevarra, right? The entire tattoo isn’t really all that bad, it’s pretty decent. It’s not exactly the kind that you feel the need to cover up. He really looked like Jimi Hendrix and we certainly wouldn’t mind having this inked on us…. BUT, whoever decided that it needed the final touch (which was to put the name, obviously), he deserves to be fired. Then again, it’s not all that hopeless. Maybe next time, when you’re in doubt, Google.

This is disaster of epic proportions! It’s one of those things so confusing, it will give you a massive headache. First things first, why do they all look painfully shocked? Is it because they know that’s not how they’re supposed to look like? Or they understand the pain of the guy who just spent hours getting his tattoo and ending up with something that blasphemous? John Lennon doesn’t even look like the famous Beatle. And you can only tell who’s SRV because of the hat. We also have no idea who the third guy is. For all we know, he could be the tattoo artist.

This artist deserves to be fired. Or maybe sent to a deserted island where he can never touch a tattoo machine ever again. There are some us hoping this is a temporary ink, you know, the kind where you just stick on your skin and peel off. The only thing accurate about this is Steven Tyler’s scarf (and well, the ‘Seasons of Wither’ phrase) and even that is a bit of a stretch. And the mouth is bigger than his entire torso, what does that even mean? Steven, if you’re reading this, we hope you can find it in your heart to forgive the man who created this.

For a moment there, we sincerely hoped this was written in Sharpies. And while we feel so bummed about this, we realize how the guy must be feeling given that he has to live with something so indescribably disastrous for the rest of his life. It’s like he asked a couple of kids to write on his back but sadly, this is the work of a tattoo ‘artist.’ How you can even consider this as an art is beyond us. And who is that guy supposed to be? Man, we are as confused as a baby in a topless bar.

So, you can’t decide between Potato Heads and KISS? Why not both? Dang, this ‘artwork’ is the kind you throw in the garbage. You don’t ink this on people. Think about it, this guy’s excited to get his tattoo (probably his first) and he tried to muster all his courage to endure the pain for hours. He’s already thinking of showing it off to his friends. And bam! We can’t even begin to imagine the look of disappointment on his face when he saw it. He was probably like, “I trusted you man and you failed me.” What a poor fellow!

Is it safe to assume the guy with the orange tie is Ringo? And the guy to his left with the distorted face is Paul? To be fair, the color is pretty solid. And it would have been okay if the image is abstract. But no, the artists had to put faces. Oh, dear. You had one job, mister. How could you do this to us? It’s like he got carried away with drawing the hair and it ended up occupying half of Ringo’s face. You can’t even tell where his head ends. Looking at it from afar, it’s like a map of the world.

You had one job! And you screw it. Ugh. I don’t know which is worse: the disproportionate cross or the wrong spelling? The guy is obviously a bad ass and a classic rock fan (mind his Guns ‘n Roses shirt). And he has no qualms about displaying his ink. But please tell us though, who the hell is ‘Black SABBAHT’? We’re kind of sure this isn’t the band who sang ‘War Pigs’ and ‘Iron Man’, right? He has other tattoos too and we’re afraid to even get a glimpse of what they look like. Hope he didn’t hire the same artist!

This is the visual proof that there’s life beyond Earth. Despite Jim Morrison’s crazy antics, we love the guy. So we think this tattoo didn’t do him justice – not even close. Let’s set our priorities straight – first of all, where did his nose go? Or the pout of his lips? Or basically the entire face? Oh the nerve to even show the original photo inspiration! If Jim saw this, we don’t know if he’ll laugh or cry because it looks so ridiculous, we’re trying so hard not to gauge our eyes out. You just can’t un-see this and we’re sorry about that.

You can never un-see this. If we can get back the last few seconds, we’d definitely choose not to lay eyes on this at all. Our life would be so much better without having this image in our brains. Props to the artist for making the aviators and bandana look good and detailed. Axl Rose’s face – ehm, not so much. If it weren’t for those two accessories, we wouldn’t even know who that tattoo is. We’re not sure if the highlights and contouring are all wrong or if the artist purposely inked a mini mustache. You just failed Axl, man.

At least, he got the guitar right. We literally fell off our seats with this one. Whoever thought this was a good idea should probably just find a new job. This is the funny comic you draw at the back of notebooks and show your friends. It’s never the one you get permanently inked on your skin – if you do, you need to hide it at every chance possible. He must have had this tattooed on him while he was drunk because there’s no way any sane person would agree to getting this. What’s up with this hotdog image? Is that beard supposed to resemble a mustard or something?

Take notes from these guys. Think before you ink. Ha! See what we did there?