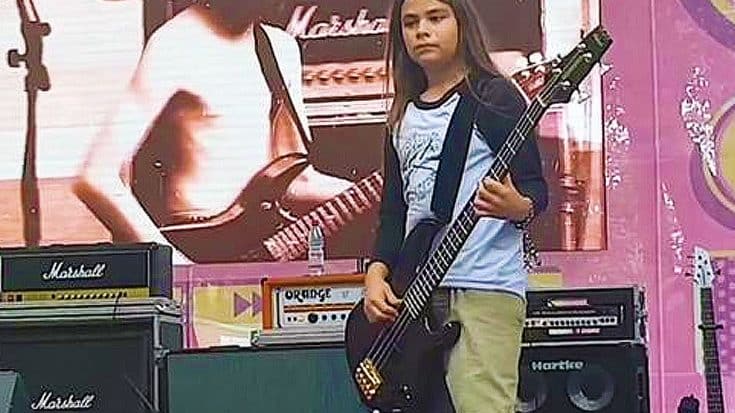 Metallica’s Rob Trujillo must be one proud papa this week! In one of music’s most talked about personnel changes, the Metallica bassist’s 12-year-old son Tye was tapped to join nu-metal rockers Korn during a brief South American tour, replacing bassist Reginald ‘Fieldy’ Arvizu after ‘unforeseen circumstances’ sidelined the bassist.

“It’s a beautiful thing, ’cause he’s still a 12-year-old. And he still acts wild and crazy, as a twelve-year-old should, but when it comes to music, he’s very focused. And with Korn, it’s funny, because I haven’t shown him anything at all for the Korn stuff — I’ve been too busy and I’ve been out of town a lot — and he’s taking this opportunity very serious.” – Robert Trujillo on Tye

I’m not sure if it’s just years of watching his old man onstage, playing in his own band The Helmets or just a rare form of professionalism far beyond his 12 years that prepared him for his big moment but whatever it was, Tye was ready and rarin’ to go when Korn took the stage for the first night of their South American tour last night, smiling shyly before launching into a 15-song set that saw the middle schooler serve up insane bass solos against drummer Ray Luzier and even give his dad a quick nod with “Shoots And Ladders,” featuring a bit of Metallica’s “One” as an added treat.

At 12, Tye’s been given an opportunity that so many dream of and to see this talented young man get out there and absolutely crush it while winning over Korn’s devoted legion of fans is more than we could have asked for. Rock on Tye, and have a great tour!