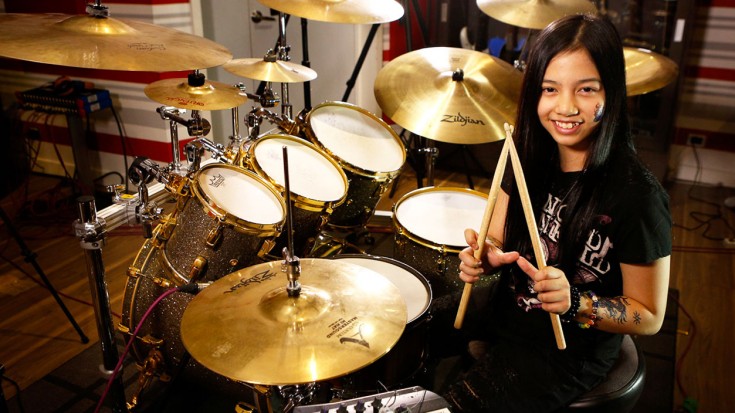 It’s not everyday that your idol recognizes your talent – it’s even more rare to actually get to jam with them; but for 12 year old YouTube drum prodigy Alexey Poblete, dreams really do come true and did when in 2015 the youngster found herself working with Philippines-based progressive rock quartet FuseBoxx and another special guest whose music holds a special place in her heart: Journey singer Arnel Pineda! Both fans of each other and of Canadian prog rock legends Rush, Alexey and Arnel launched into a spirited rendition of “Tom Sawyer” with the help of FuseBoxx that can only be described as everything we’ve ever wanted in a cover.

Fun Fact: Alexey’s more than 300 videos on Youtube caught the attention of Eric Singer, drummer of the prolific rock band Kiss, who is now Alexey’s mentor.

Alexey covered “Tom Sawyer” years ago at the tender age of 8, one year after she took up the drums as a hobby – while it was good, hearing this talented young lady take another crack at it 4 years later and hearing how incredibly tight her drumming is really makes you appreciate the years of hard work she’s put into her craft!