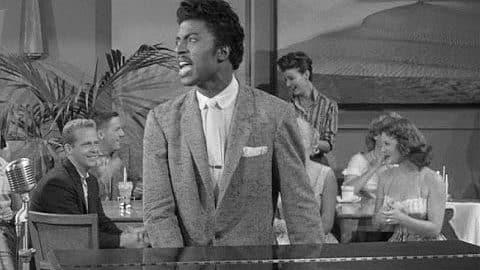 From The Architect of Rock ‘n Roll

Little Richard wouldn’t be called an “innovator” for nothing. He single-handedly influenced countless artists from the 1960s and beyond. From The Beatles to David Bowie and Bob Dylan, Little Richard’s influence spread far and wide. Decades after he achieved massive success and popularity, he remained an icon thanks to a series of hits that achieved classic status – one of which was “Tutti Frutti”.

Here are ten interesting facts about it:

1. He wrote this while working as a dishwasher.

He was at a Greyhound bus station in his hometown of Macon, Georgia when he got the idea for the song.

“I couldn’t talk back to my boss man,” he told Rolling Stone. “He would bring all these pots back for me to wash, and one day I said, ‘I’ve got to do something to stop this man bringing back all these pots to me to wash,’ and I said, ‘Awap bop a lup bop a wop bam boom, take ’em out!’ and that’s what I meant at the time.”

2. He also came up with his other classics in that same kitchen.

“Good Golly Miss Molly” and “Long Tall Sally” were all written while he busy washing pots.

3. He used to perform it as “Tutti Frutti, Good Booty”.

Specialty Records thought it was way too suggestive though, so they cleaned it up and it became “Tutti Frutti, aw Rudi.” They also tweaked some of the lyrics, and it was Dorothy LaBostrie who sanitized them in only 15 minutes.

He wasn’t an overnight success though since he struggled for a couple of years before he got his break.

5. After hearing Richard play it on the piano, singer Lloyd Price encouraged him to send a tape to Specialty Records.

Richard sent a demo of “Baby” and “All Night Long”, but the owner wasn’t impressed. Richard didn’t give up though, and he continued to persist by always following up.

6. It barely made the cut to “Here’s Little Richard”.

It was producer Bumps Blackwell who insisted that Richard record it and include it on the album.

7. It was covered by Pat Boone.

He had a bigger hit with it too, and he explained that Richard felt grateful for the exposure.

“Elvis may be the King of Rock and Roll,” Richard said, “but I am the Queen.”

9. Richard played the piano himself.

During recording sessions for the album, it was Huey “Piano” Smith who played on the first eight tracks but he didn’t have time to learn “Tutti Frutti”.

“My greatest achievement would have to be ‘Tutti Frutti,'” he told MOJO magazine. “It took me out of the kitchen – I was a dishwasher at the Greyhound bus station, making $10 a week working 12 hours a day, and ‘Tutti Frutti’ was a blessin’ and a lesson. I thank God for ‘Tutti Frutti’.”