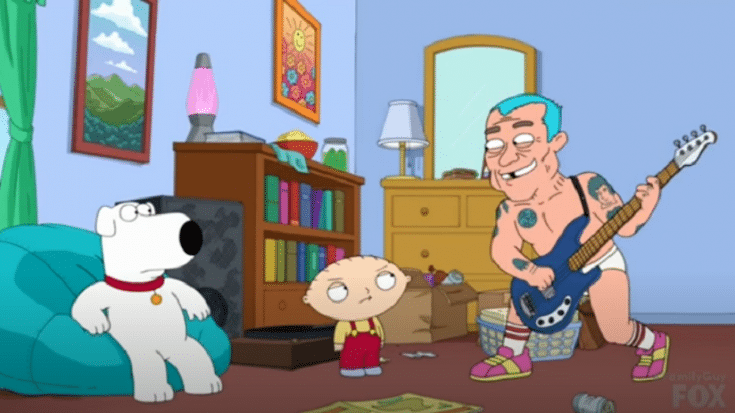 Created by Seth McFarlane, Family Guy debuted on January 31, 1999. If there’s one thing anyone needs to know about this show, it’s that it’s not exactly family-friendly despite its name. And nothing is off limits to them including featuring famous and sometimes controversial figures in pop culture, that includes rockstars of course.

Through the years, many legendary rockers found themselves “appearing” on the sitcom. Let’s check out some of the funniest and most memorable moments.

During one visit to the ER, Peter reveals he had his stomach pumped. After asking the doctor “What was in there?”, the doctor replies that it was “an extensive list” so he had Billy Joel help by enumerating the items. Billy Joel then plays the piano and sings, “Lots of Legos, rubber bands, web-shooting Spider-Man, an old pet rock, an antique clock, a ton of red Play-Doh, colored pencils, lots of nickels,” and so much more.

After finding out they sing so well together Peter and Quagmire, they were billed to be part of a local music festival. They encounter folk rock legend Bob Dylan backstage and Peter calls him “the greatest living overrated singer.” Peter then approaches Dylan and asks him what inspired him to write “Mr. Tambourine Man.”

In a Family Guy version of the fairy tale “Jack and the Beanstalk”, Heart makes an appearance by singing “These Beans” instead of “These Dreams”. Ann and Nancy Wilson actually provided their own vocals for this episode.

Peter accused the Federal Communications Commission of censoring them and a government official then tells them to “clean up you act like Ozzy Osbourne when he stopped biting the head off bats” – a reference of one of Osbourne’s most controversial onstage moments. The next scene shows a shirtless and heavily tattooed Osbourne on stage announcing, “Before I start playing, I’m gonna be eating this whole sandwich.” And yes, the crowd goes wild.

There have been lots of David Bowie references in the show but on “Stewie Griffin: The Untold Story”, Bowie is shown on the red carpet being interviewed by reporter Tricia Takanawa. Bowie shushes her and says, “Just you shut your mouth.” After which she proceeds to dry hump Bowie’s leg and proclaims that she’ll take him home.

When Chris goes through his goth phase, his parents think it’s because of the “violent music” he listens to that causes him to become rebellious. Then, they see a poster of Marilyn Manson in Chris’ cabinet. Peter declares they have to find Manson and give him “a piece of my mind”. When they finally found him, he punched Manson for “ruining our son.” Chris’ parents bring home Manson who tells him, “Rock ‘n’ roll music is cool, but respect for your elders is a tune we can all dance to.”

Stewie begins complaining about Brian calling him messy, loud, and a “recurring flea problem”. Red Hot Chili Peppers bassist Flea then makes a cameo – playing the bass in his underwear. Flea asks, “You wanna hang out?” To which Stewie responds with, “Go away, Flea! You’re not welcome here. And put on a shirt – you’re 50!”

Like Bowie, Rush has been referenced several times. In one episode, Brian recalls “the time Peter was the only person not wearing black jeans to a Rush concert.” The scene cuts back to Peter wearing what he calls his “concert khakis”. Geddy Lee calls him out and says to the audience, “Beat him, beat him in 6/8 time.”

After voicing concerns about Stewie’s preschool, his parents consider sending him to a private school instead. Peter asks, “Is that the one where they make him dress in a little shorts and hats like the guy in AC/DC?” Angus Young appears on stage playing the guitar and doing his iconic duck walk. He says, “When I picked this, I didn’t know I’d have to wear it when I’m 60. I’m very cold.”

Not only is Peter an ardent KISS fan but Lois actually dated Gene Simmons before he became famous.