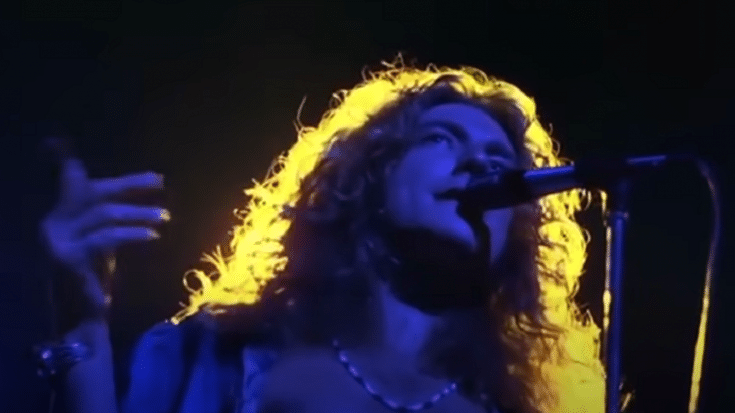 Robert Plant is the very definition of rock god. From his good looks to his immense vocal talent and impressive range, his legendary status is well-deserved. Many have tried but no one could ever duplicate him and his voice. He added more flavor to every Led Zeppelin song and took it to another level with his banshee screams, howls, and wails.

Let’s look back at the interesting things in his career.

1. One of Robert Plant’s influences is none other than Elvis Presley. During their heyday in the ’70s, Plant and Jimmy Page got the chance to meet Presley himself. Presley heard about Led Zeppelin and wanted to meet them. The band watched Presley’s concert in Las Vegas after which, The King invited them backstage. After a few awkward moments, Plant broke the ice and they hung out for a couple of hours. In 2008, Plant paid his respect to the legend by visiting Graceland.

Flashback to July 2008 when the legendary Robert Plant visited us! Right now you also have the unique opportunity to see Graceland like a celebrity, because reduced capacity means the Graceland experience is more intimate than ever before. To get more info about how you can tour Elvis’ home in your own space and at your own pace, visit graceland.com

2. He wasn’t Page’s first choice as lead singer – it was Terry Reid but Reid turned him down. But before accepting Jimmy Page’s offer to be Led Zeppelin’s frontman, he sought advice from Free’s Paul Rodgers. Rodgers shared to Ultimate Classic Rock, “He came back to our hotel for a cup of tea, and he said, ‘Oh, I met this guitar player down in London called Jimmy Page. Have you heard of him?’ And I said, ‘Yeah, a lot of people are talking about him. He’s a great session musician down in London.’ He said, ‘Yeah, they’ve offered me a job. They want to put a band together. They’ve offered me 30 quid a week or a percentage. What do you think?’ And I said, ‘Well, you know what I would do? I’d take the percentage.'”

3. Although Plant wrote six out of nine songs from Led Zeppelin’s self-titled debut album, he didn’t get any songwriting credit because he was still under contract for a different record label. A few years later, he was given a retroactive credit on the tracks.

4. “Stairway to Heaven” is undoubtedly Led Zeppelin’s crowning achievement but while it’s an absolute musical masterpiece, it’s hard to deny that it’s been overplayed for decades. And it’s understandable that Plant himself got a little sick of listening to it. And so, he reportedly paid a radio station in Oregon $10,000 to stop playing “Stairway to Heaven”.

5. He didn’t have formal music education but it rarely matters because he has penned some of the band’s most enduring hits.

6. Looking back, Plant isn’t too fond of the lyrics he wrote (inspired by J.R.R. Tolkien’s The Lord of the Rings”) or even his vocal performances. He once told The Guardian: “I realised that tough, manly approach to singing I’d begun on You Better Run wasn’t really what it was all about at all. Songs like [Led Zeppelin I’s] Babe I’m Going To Leave You … I find my vocals on there horrific now. I really should have shut the fuck up!”

7. While working on their seventh studio album “Presence”, Plant was confined to a wheelchair during the recording sessions. He and his then-wife Maureen sustained serious injuries from a car accident. It took him a while to recover and according to Page, “Robert was really keen to do the recording, and we all were, because there wasn’t anything else that we could do.”

8. He’s one of the rockstars who helped a struggling music venue, The Bell pub on Walcot Street, and keep it running. Him and Peter Gabriel were part of a community buyout scheme. Plant said, “For the last 10 years or so many of my musical adventures have been with friends from Bristol and Bath, so I’m fully aware of the Bell and its legacy and its contribution to the musicians and audience in the surrounding area.”

9. He found it vocally challenging working with Alison Krauss and Patty Griffin. He admitted, “I’ve really had to learn a different way of adapting my voice. So that was a tough thing to do, but I really wanted to do it. And it’s given me enough of a vocal personality to break away from the old days, but still be able to visit them.”

10. After disbanding in 1980 following the death of drummer John Bonham, Plant has repeatedly turned down any Led Zeppelin reunion tour. Although he briefly reunited with Page for a side project, he told Rolling Stone in a 2014 interview: “A tour would have been an absolute menagerie of vested interests and the very essence of everything that’s sh*tty about big-time stadium rock. We were surrounded by a circus of people that would have had our souls on fire. I’m not part of a jukebox!” A few years later in 2018, he explained: “If it’s easy, and it’s not of a great deal of consequence, OK. But when you’re in your seventies? You have to be really careful about maybe putting a bit more time into playing bingo, and enjoying the time you have left. For me, my time has got to be filled with joy and endeavor and humor and power and absolute self-satisfaction. That’s not with Led Zeppelin.”