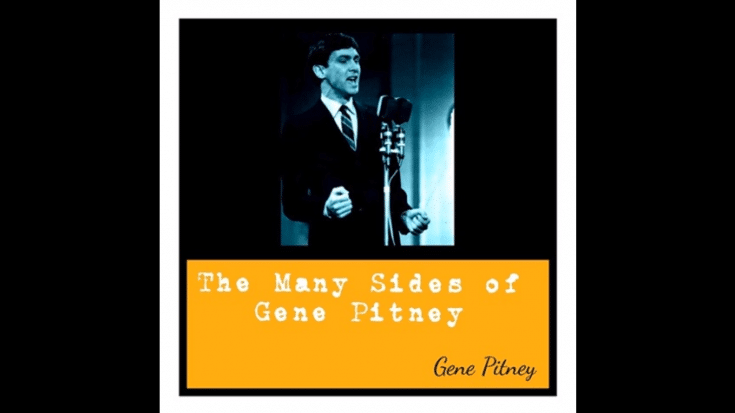 Two of the things that made Gene Pitney a cut above the rest were his range and versatility. He was a performer through and through, and as a singer, he could go from rock to ballad and nail it every time. He’s also a songwriter, a multi-instrumentalist, and a sound engineer. As far as talent goes, he lacked absolutely nothing. Although his career in the US waned in 1966, he managed to stay successful and prominent in the UK and the rest of Europe in the ’70s.

Here are some of his career highlights:

1. His early influences include rhythm and blues, soul and rock and roll singer Clyde McPhatter, country and western singer Moon Mullican also known as the “King of the Hillbilly Piano Players”, and R&B singing group The Crows.

2. He scored his first charting single in 1961 with “(I Wanna) Love My Life Away” which peaked at #39 on the US Billboard Hot 100 and charted in Canada and UK too. Pitney didn’t just sing but played several of the instruments and multi-tracked the vocals.

3. He was a prolific songwriter who penned hits for other musicians such as Roy Orbison’s “Today’s Teardrops”, Bobby Vee’s “Rubber Ball”, Ricky Nelson’s “Hello Mary Lou”, and The Crystals’ “He’s a Rebel.”

4. Although “He’s a Rebel” was credited to The Crystals, it was actually sung by another girl group The Blossoms. It topped the US Billboard Hot 100 on November 3, 1962 and on the second place is Pitney’s own single “Only Love Can Break a Heart”. Also, Pitney never landed on the #1 spot in the US chart as a performer.

5. He was nicknamed “The Rockville Rocket” by a radio disc jockey because of his chart success.

6. He played piano on some of The Rolling Stones’ songs on their debut album.

7. He became popular in Italy, Spain and Germany. He even recorded the Italian pop song “Nessuno mi può giudicare”.

8. During the later part of his career, he made money mostly from touring.

9. The night before he was found dead in his hotel room, he received a standing ovation at a concert at St. David’s Hall in Cardiff, Wales.

10. In 2003, he told Daily Mail: “If I could choose a season in which to die it would be late autumn, when it’s still nice and warm here and all the leaves are changing colour. I’d love the Rolling Stones to come and play at the party – I’m sure they’ll still be touring long after I am dead.”