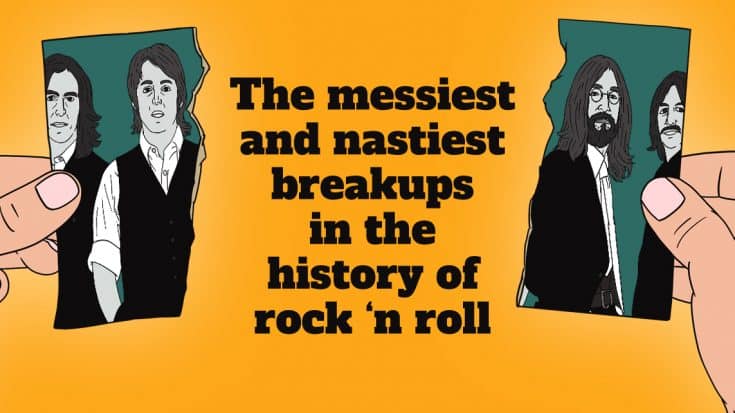 Breakups are often inevitable especially for rock bands. Conflicts, disagreements, and arguments are par for the course but some people take it to the next level by either discussing private feuds with the press or when things get physical. Let’s revisit the messiest and nastiest breakups in the history of rock ‘n roll:

They may have churned out some of the most memorable tunes in the ’60s but as a group, they didn’t even last for a decade. In early 1971, Tom Fogerty left but CCR continued as a trio. But in 1972, they officially disbanded. And when they were inducted into the Rock and Roll Hall of Fame in 1993, both bassist Stu Cook and drummer Doug ‘Cosmo’ Clifford were in attendance but John Fogerty refused to play with them. The two were barred from the stage and John Fogerty instead performed with an all-star band that featured Bruce Springsteen and Robbie Robertson.

They made great records together and are undoubtedly one of the greatest supergroups in rock history but like every other supergroup out there, their egos clashed and the constant bickering took a toll on them. Some of the members collaborated with each other but when all four gather in the studio, tensions would mount again. Over the years, they didn’t shy away from making their feuds known by the public. Graham Nash once told Dutch magazine Lust For Life: “I don’t like David Crosby right now. He’s been awful for me the last two years, just f**king awful I’ve been there and saved his f***ing ass for 45 years, and he treated me like s**t.”

It doesn’t take much for Ray and Dave Davies to be at each other’s throat. Their long-standing beef is pretty well-known and much talked-about. They have a toxic relationship and their fights are childish – take for example the time Ray famously stamped on Dave’s birthday cake. And so The Kinks’ breakup was really just a matter of time. Dave said in an interview, “You’ve heard of vampires. Well, Ray sucks me dry of ideas, emotions and creativity. He’s a control freak.”

After Black Sabbath fired their frontman Ozzy Osbourne, the Prince of Darkness hit rock bottom. At the time, the band members indulged in alcohol and cocaine and it heavily affected their creativity. Guitarist Tony Iommi recalled, “Ozzy was going to clubs and getting really out of it and not coming home. It got to a stage where nothing was happening with him. He came apart on us.” If they weren’t high, they were drunk. And so when it came to new records, they couldn’t move forward and get anything done. But looking back, Osbourne didn’t see it coming – that he’d get kicked out of Black Sabbath. He mused, “I’d be lying if I said I didn’t feel betrayed by what happened with Black Sabbath. We were four blokes who’d grown up together a few streets apart. We were like family, like brothers. And firing me for being f—ed up was hypocritical bulls–t. We were all f—ed up. If you’re stoned and I’m stoned and you’re telling me that I’m fired because I’m stoned how can that be? Because I’m slightly more stoned than you are?”

Guns N’ Roses didn’t officially split because when band members left, others were brought in to take their place. After they reached the height of their career, Axl Rose got a major ego boost. He basically picked fights with anyone and everyone – including his own bandmates. Axl Rose and Slash had years-long beef with each other and didn’t speak for two decades. At one point, the GnR frontman called Slash a “cancer” and added that “There’s zero possibility of me having anything to do with Slash other than by ambush, and that wouldn’t be pretty.” So it’s a good thing that it was Axl Rose who first reached out to Slash. And when they got back together, they embarked on a massive record-breaking tour.

Van Halen was at the top of their game when frontman David Lee Roth announced that he’s leaving the band. According to Eddie Van Halen, Roth declared that “I can’t work with you guys anymore. I want to do my movie. Maybe when I’m done, we’ll get back together.” EVH then began looking for a new lead singer and it wasn’t long before EVH told Rolling Stone magazine, “The band as you know it is over. Dave left to be a movie star.” And then he added, “He even had the balls to ask if I’d write the score for him.” They eventually welcomed Sammy Hagar to the fold.

Tensions were already high among the members but things came to a head on July 31, 1980, in Long Beach, California. Glenn Frey recalled, “I felt Don Felder insulted Senator Cranston under his breath, and I confronted him with it. So now we’re onstage, and Felder looks back at me and says, ‘Only three more songs till I kick your ass, pal.’ And I’m saying, ‘Great. I can’t wait’. We’re out there singing ‘Best of My Love,’ but inside both of us are thinking, ‘As soon as this is over, I’m gonna kill him.’ That was when I knew I had to get out.” Frey told bassist Timothy B. Schmit the next day that The Eagles were no more. Almost three decades later, they set aside their differences to record Hell Freezes Over.

Two brothers who can one-up Ray and Dave Davies are Liam and Noel Gallagher. Their fights got physical such as the time Noel hit Liam over the head with a bat or when Liam chucked a tambourine at Noel. They traded barbs in front of the press and in 2009, they disbanded. Noel revealed to Radio X, “I had enough when Liam and Bonehead – and this is true – started arguing over a leather jacket. I am not even kidding. I can dress it up more than this, but this is what happened.” But as for Liam, he said: “I don’t know why we split up. I’d like to know.”

Speaking of messy and nasty breakups, look no further than Pink Floyd. Roger Waters and David Gilmour have been feuding for over three decades now. They did get back together for a one-off performance at Live 8 but after that, they remain estranged. Drummer Nick Mason, who has kept mum for years, told Rolling Stone in 2018: “It’s a really odd thing in my opinion. But I think the problem is Roger doesn’t really respect David. He feels that writing is everything, and that guitar playing and the singing are something that, I won’t say anyone can do, but that everything should be judged on the writing rather than the playing.”

When The Beatles broke up, it was the end of an era. Fans were heartbroken because for close to a decade, the Fab Four provided the soundtrack of our lives. But in hindsight, the split needed to happen because they held each other back – particularly George Harrison who had a backlog of musical gems which were rejected by John Lennon and Paul McCartney. Their breakup did them good as they each launched successful solo careers.