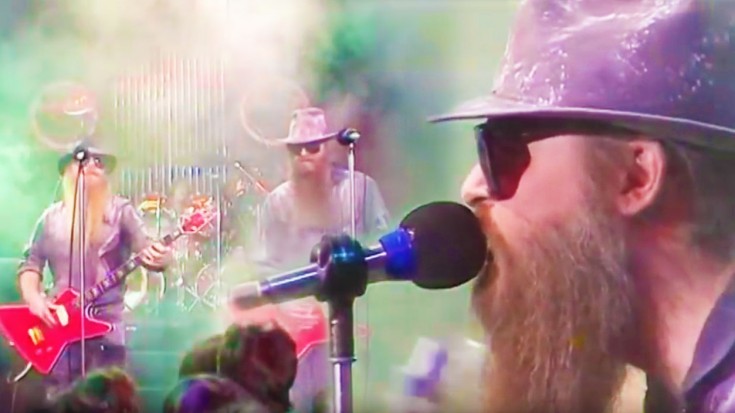 As their first attempt to utilize the genius of the synthesizer in music, ZZ Top’s “Gimme All Your Lovin” became one of their most famous and well- known hits and still is to this day. Performing the great southern hit at their on their Eliminator in 1983 at Wembley Arena, ZZ brings the heat with the song that took them to #10 on the UK Singles Chart.

Interesting Fact: This was the first single from the Eliminator album, which went Diamond, meaning it sold over 10 million copies.

This song was a new territory for the group with not only the introduction of the synthesizer, but was also their first video ever filmed. The infamous video featured a beatdown, young gas station attendant being tempted by beautiful women driving Billy’s Eliminator 1933 Ford Hot Rod, that the duo was well-known for enjoying. As a genius move, whether premeditated or not, the video actually bleeds into their “Sharp Dressed Man” video, featuring the same boy in a continuation of the story.

Smoke fills the Wembley stage as Billy and Dusty proceed to bring “a little bit of southern rock” to London, England and it is more than a sight to see. Enjoy this somewhat rare and perfect quality video of the southern gentlemen in their prime!

+ Gimme All Your Lovin’ Lyrics +