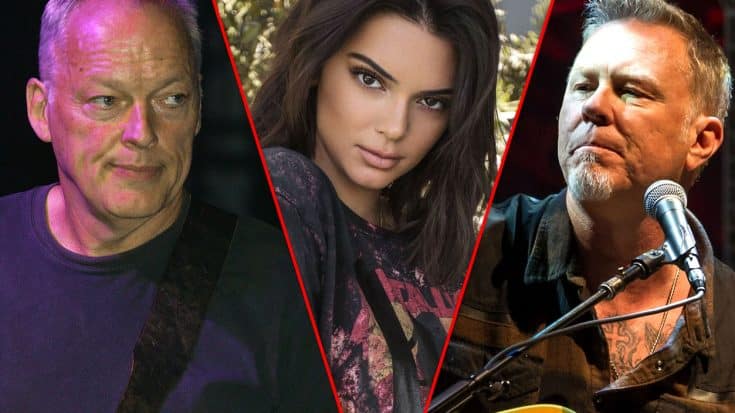 First they came for television, then they came for fashion – now, they’ve come for music. That’s right, y’all – the Kardashians and Jenners have set their sights on the rock and roll world as youngest kids Kendall and Kylie launch their clothing line, Kendall and Kylie, and with it a line of retro classic rock t-shirts.

…except for the part where they don’t.

The shirts, retailing for upwards of $125, are touted as “One of a kind vintage originals” and bear the album art and logos of The Doors, Metallica, Kiss and Pink Floyd, but the Jenner girls took it one step further and actually had their giant “KK” logo and pictures of themselves superimposed over the original art, sparking outrage among rock fans – including one who took to twitter to say, “Jim Morrison didn’t die for this.”

Here’s a look at some of the shirts causing the backlash:

Jim Morrison did not die for this shit pic.twitter.com/FefcbtuFwj

Kylie & Kendall are stupid if they think anyone is going to buy a t-shirt for $125 AND ruined the band cover with their initials boi byeee pic.twitter.com/gGUaz8lEvP

This ‘brand-new vintage’ band t-shirt by Kendall Jenner is the oxymoron your English teacher deserves pic.twitter.com/wfJfebI6nc

Yikes! The backlash has actually been so negative – including a scathing reply from the mother of late hip hop artist Notorious B.I.G., whose own shirts were defaced with the brand – that the Jenner girls actually removed all traces of the shirts from social media and their official website. No word yet as to whether it was the criticism from fans or from the artists and their estates, but judging by today’s response to their product it’s safe to say that we thankfully will not be seeing those shirts again.