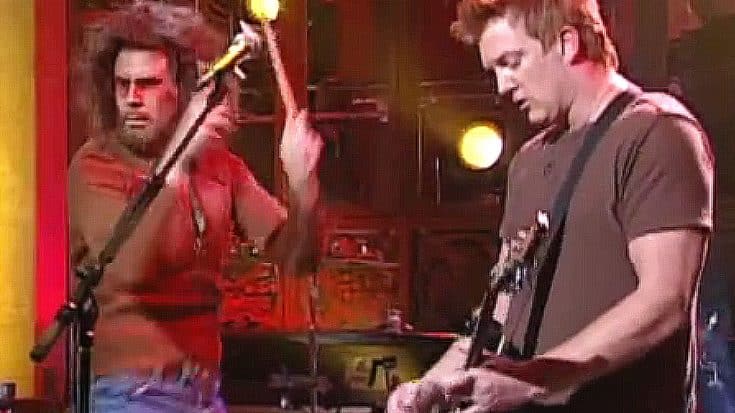 17 years after Gene Frenkle burst onto our television screens in a too-tiny shirt with a cowbell in his hands and a song in his heart, Will Ferrell’s iconic “More Cowbell” sketch is still pretty damn funny. Making its world debut on Saturday Night Live’s April 8, 2000 episode, “More Cowbell” returned to SNL just 5 years later in a totally unexpected way when Ferrell and musical guests Queens of the Stone Age shared the night’s billing.

For a moment it was business as usual; Will introduced Queens of the Stone Age and their smash hit “Little Sister” from their newly released Lullabies to Paralyze and the band took it from there, frontman Josh Homme leading the charge and giving no indication of what was to come aside from a quick glance to his left.

Ever Wonder What Blue Öyster Cult Thinks Of It?

Buck Dharma and Eric Bloom can’t get enough of it! Bloom says, “I even have it on tape, and it still pretty much blows me away. Buck has it on MP3 and we listened to it in his car one day. It’s almost as funny to listen to it as watching it.”

Suddenly, Will – I mean, Gene Frenkle of Blue Öyster Cult – jumps out from backstage, cowbell in one hand and a drumstick in the other, playing along with Queens of the Stone Age drummer Joey Castillo and positively dominating the scene with his frenzied cowbell jam. I’ve seen this footage a million times and as hard as I’m laughing, I’m amazed at the guys in Queens of the Stone Age, especially Josh Homme, and their ability to keep a straight face the entire time – Will Ferrell wilding out behind you with a cowbell? Come on!

Check out Queens of the Stone Age featuring Gene Frenkle and his beloved cowbell in the video below – it’s definitely worth a giggle or two!