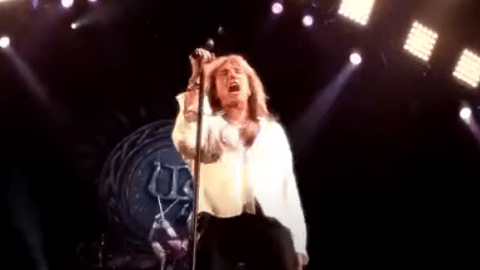 In the midst of preparing for a tour next year, Whitesnake has parted ways with bassist Michael Devin after 11 years.

“Whitesnake & bassist Michael Devin have decided to go their separate ways after an amazingly successful decade together,” a statement posted on David Coverdale’s social media accounts read. “We all wish Michael every success in his life & all his endeavours. Apart from numerous tours, Michael applied his talent to studio albums ‘Forevermore’… ‘The Purple Album’ & ‘Flesh & Blood’. We sincerely thank him for being part of our journey & for all his exceptional gifts he brought to Whitesnake…”

“God speed, Michael… Know we love you & will miss you…& we wish you well. Once a snake…always a snake,” the band members continued. “Whitesnake have secured a new bass player who will be announced very soon.”

In June, Coverdale spoke about Whitesnake’s upcoming trek and confirmed that he would be retiring from touring after it wrapped up.

“Mine’s gonna be the farewell tour ’cause I’m knocking on 70,” he said. “Are you kidding?! It’s hard enough now to get into my jeans.”

“I’m gonna show my appreciation and gratitude for the support that I’ve had, ’cause you can’t do it without an audience supporting you — it’s that simple,” he explained. “And they know — the hardcore [fans] who follow me know — I do my best, the best I can do at that time. And that’s been my work philosophy for as long as I can remember.”