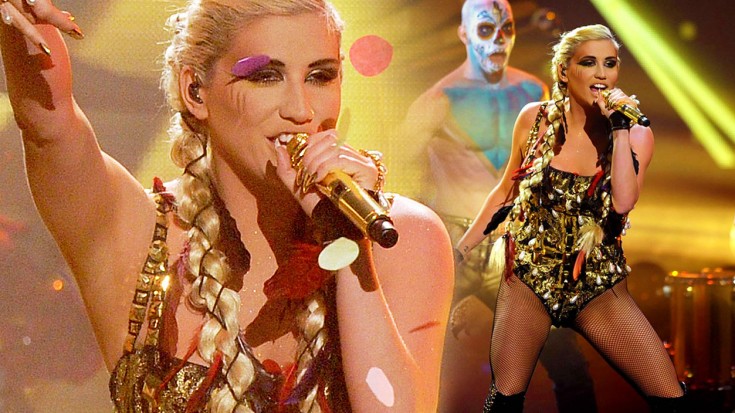 2012 was a massive year for pop mega star Kesha; her second studio album Warrior was met with glowing praise and the album’s lead single “Die Young” was racing to the top of the charts, breaking into the top 10 of the Billboard Hot 100 by its third week before peaking at a wildly impressive #2 slot. Two months after the debut of “Die Young,” she appeared at the American Music Awards to ring in the event’s 40th anniversary as only she could – with a show-stopping performance of “Die Young” that Billboard would later hail as being “one of the 5 best performances of the evening”, showcasing Kesha’s tremendous abilities as both an entertainer and vocalist and silencing any and all backlash from critics silly enough to doubt her.

Keeping with the theme of the song’s music video that featured her as a cult leader leading her disciples on a sexual ritual, Kesha takes the stage on a throne, shrouded in a black veil as backup dancers painted to look like sugar skulls surround her, beating drums and escorting their fearless leader onto the stage for an explosive dance routine that can only be described as positively stunning!

Fun Fact: In its third week, “Die Young” broke into the top-ten, making it Kesha’s seventh top-ten hit since her debut on the chart in 2010 with “Tik Tok” and ninth top-ten hit including her collaborations with Flo Rida and 3OH!3.

Written in 2011 and inspired by her life changing spiritual journey around the world, “Die Young” is Kesha’s ultimate celebration anthem – celebrating life in all of its wonderfully messy, wonderfully complicated glory and urging fans everywhere to live each day as if it’s their last, seizing every opportunity for happiness until last call comes around and that final breath is taken. Her performance at the American Music Awards is a glowing extension of that celebration; a rollicking, fiercely passionate good time by a talented young woman with the world quite literally at her feet!