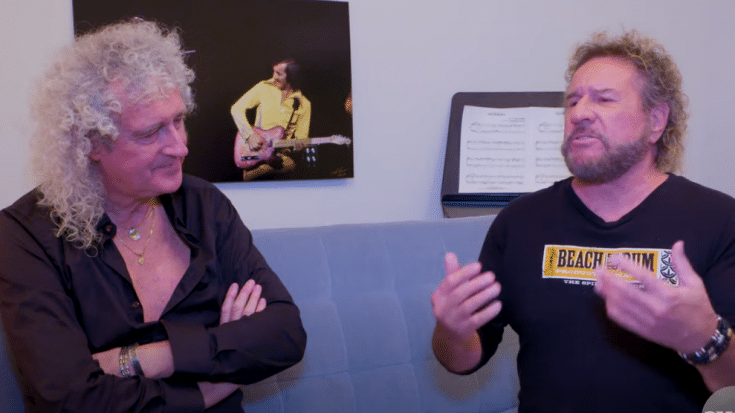 In a deleted scene from Rock & Roll Road Trip with Sammy Hagar, Brian May talks about a secret recording Queen did with Adam Lambert and his love for writing and producing music.

When Hagar asked what’s next for May and Queen or just him as a solo act, the guitarist said:

“I do a bit of recording here and there.

“We have recorded with Adam in secret but we haven’t felt it was right to put it out… We didn’t think we hit the right kind of vibe.”

May is currently on the tour of Queen + Adam Lambert. As per his solo career, he said:

“I do a lot of recording with other people… I love to produce people, I love to write for people.

“To me, a song is about a singer and music is about songs. So really it’s all about singers.”

He explained that the rest of the things put into a song is important too but May added:

“It’s not as important as the person who’s putting across the ideas so I love to write. I love to write for Freddie. I loved to see him do his stuff with a song.”

Hagar then said he would like to write for Freddie too and May continued:

“He was great coz you would give Freddie something and he would make it into something else. He would take it to the next place so I miss that.”

May shared that he is working on several projects including with English actress and singer Kerry Ellis and the band Kings Daughters. He stated:

“I love being in the studio and I love talent and I love singers. Singers to me is what it’s all about.”

Watch the whole clip below.