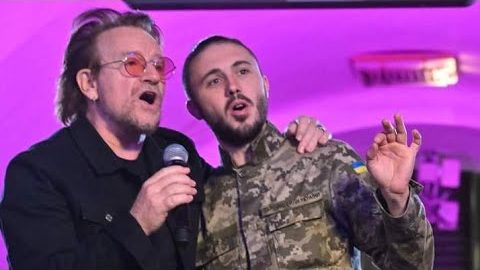 U2 singer Bono and lead guitarist the Edge performed for “Solidarity with Ukraine” surprise concert last Sunday inside the Kyiv’s Khreshchatyk metro station that is now serving as a bomb shelter.

Bono posted a tweet accompanied by the hashtag #StandWithUkraine:

“President Zelensky invited us to perform in Kyiv as a show of solidarity with the Ukrainian people and so that’s what we’ve come to do.”

The U2 members played a 40-minute acoustic set performing hits such as “With or Without You” and “Angel of Harlem.” During the set, Bono reportedly told the audience of about 100 people:

“The people in Ukraine are not just fighting for your own freedom, you are fighting for all of us who love freedom. We pray that you will enjoy some of that peace soon.”

Bono also added some words from the lyrics of U2’s 1984 hit “Pride (In the Name of Love)” to his statement:

“This evening, 8 May, shots will ring out in the Ukraine sky, but you’ll be free at last. They can take your lives, but they can never take your pride.”

The duo was also joined by Ukrainian singer Taras Topolia of the band Antytila in singing an acoustic rendition of the classic Ben E. King song “Stand By Me.” After the song, Bono gave the spotlight to Topolia, to deliver a message addressing the world leaders to continue assisting Ukraine in their war with Russia.

Topolia noted the city in Ukraine’s south that has suffered some of the war’s most devastating death and destruction saying:

“I’m asking you to help our president and our diplomacy to extract Ukraine’s soldiers from Mariupol.”

U2 aren’t new in being involved with political and humanitarian causes. In their long history of activism, they have supported the Amnesty International, playing the Secret Policeman’s Ball, Band Aid and Live Aid. They are also a longtime advocates of AIDS awareness and education, including support for the RED Project, which Bono co-founded.