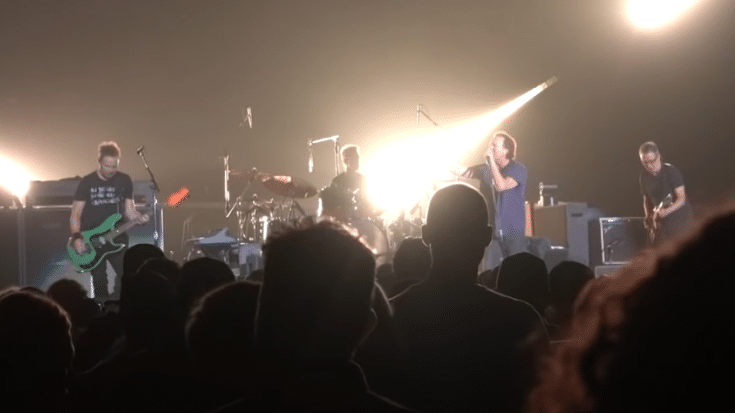 A lot of bands and other artists have already paid tribute to the late Foo Fighters drummer Taylor Hawkins since his passing and it’s still continuing.

During the first half of the opening night of Pearl Jam‘s Gigaton tour last Tuesday, May 3 in San Diego, Calif., Eddie Vedder honored the late icon and stated his condolences to drummer Matt Cameron who were deeply closed with Hawkins.

The band performed a 24-song set that spanned around three hours long and before “Quick Escape,” Vedder said:

“… lights together, and they still wouldn’t match up to the light that poured from within that guy. He emitted something very incredibly, very special, and we all miss him. So Matt, I’m sorry for your loss.

“But it just gives us another chance to say how much we appreciate you as well.”

Hawkins is one of the musicians that joined Pearl Jam onstage back in October of 2021 at the Ohana festival. While outside their bands, Cameron and Hawkins had collaborated on a project in 2020 called the Nighttime Boogie Association, which they formed after performing together at the 2019 “I Am the Highway” tribute concert for Chris Cornell. The duo released two tracks, “The Path We’re On” and “Long in the Tooth.”

“He’s in my top 10 all-time drummers. He’s a fucking legend.

“[Dave] Grohl and me will both sit there and go, ‘He is the Neil Peart of our generation.’ He is that guy who does shit where you’re like, ‘There’s no way I could ever do that.’ He’s so precise, yet still such a rock drummer. It’s hard to do that. I just wanna gush on Matt for awhile.”

“I love Taylor Hawkins. He brought so much joy and happiness to my life. I can’t believe he’s gone.

“I miss him already damn. My deepest love and condolences to the entire Foo Fighters organization and to the beautiful Hawkins family.”

Watch a fan footage of the performance below.