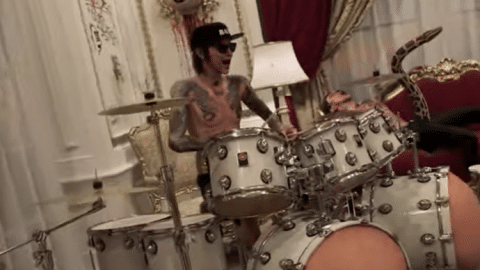 Mötley Crüe drummer Tommy Lee teamed up with his wife and podcast host, Brittany Furlan. The couple recently released a new song, “Bouncy Castle,” accompanied by a music video for their fans.

“Bouncy Castle” marks the couple’s first project together. The new animated video was accompanied by an electronic song by Lee, himself. The tune sounds very different from any of Lee’s rock and metal efforts with his band.

The drummer is very open and vocal when it comes to sharing explicit content. Recalling his nude pictures in earlier months, it became a hot topic on the internet, and now the new music video for his single was no exception. Just like what happened to his full-frontal nude photo, the explicit music video was removed by Instagram.

On the other hand, YouTube turned the video into an age-restricted one. Lee wrote upon sharing the teaser of the new single on his Instagram account:

“Me and Nick DenBoer f*cked this ‘Bouncy Castle’ UP! Our collaboration feat. Me and Brittany Furlan. Cue the nipple police. Music Tommy Lee.”

Lee has worked with the movie and music video director, Nick DenBoer, even before working together for the “Bouncy Castle.” Stream their new song below.