Watch These Two Guys Shred An Amazing Acoustic Cover Of “Eye Of The Tiger” With This 360 Video! 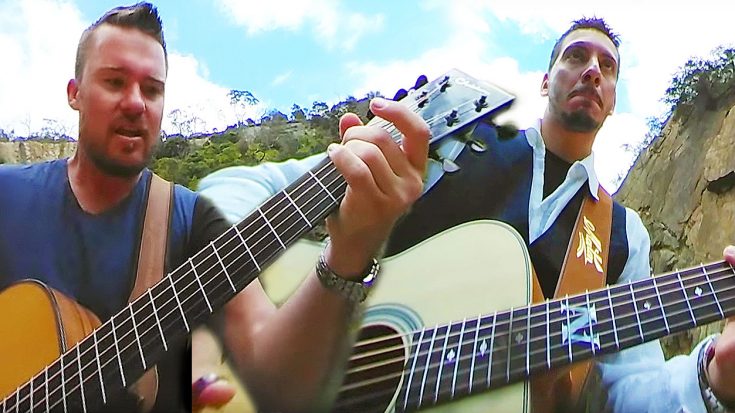 You can see all angles of the shred-off!

Everyone knows the iconic song. Whenever you hear the first notes kick in, you immediately get pumped up for whatever is coming next. There’s a reason it was the song to kick off the Rocky movie, and became synonymous with the film’s series! Of course, we’re talking about Survivor’s “Eye of the Tiger!”

Everyone loves the catchy tune, but no one has ever heard it quite like this! These two guys from FingersSTYLE Movies, a channel on YouTube, covered the song on acoustic guitars. The two pulled off an amazing duet of this classic and they are absolutley insane! The two completely re-work the song, and turn it into an acoustic jam session! It’s amazing to see what they can do with simple acoustic guitars! In addition to the guitar playing, the two filmed it on a 360 camera, so you can drag around and see every angle of this epic jam!

Fun Fact:The iconic title of this song was not a sure thing. Jim Peterik told us: “At first, we wondered if calling it ‘Eye Of The Tiger’ was too obvious. The initial draft of the song, we started with ‘It’s the eye of the tiger, it’s the thrill of the fight, rising up to the spirit of our rival, and the last known survivor stalks his prey in the night, and it all comes down to survival.’ We were going to call the song ‘Survival.’ In the rhyme scheme, you can tell we had set up ‘rival’ to rhyme with ‘survival.’ At the end of the day, we said, ‘Are we nuts?’ That hook is so strong, and ‘rival’ doesn’t have to be a perfect rhyme with the word ‘tiger.’ We made the right choice and went with ‘Eye Of The Tiger.'”