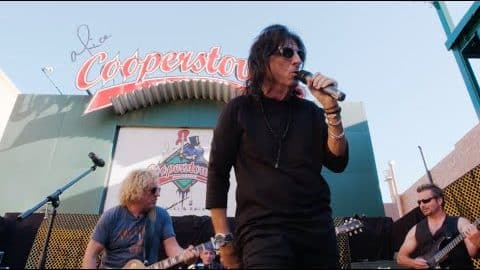 Sammy Hagar recently shared the stage together with Alice Cooper in Cooperstown.

The two rock stars joined together to perform “School’s Out,” originally sung by Cooper himself. After the performance, Hagar went inside a Musical instrument museum wherein he had a chance to take a look at the rock and roll’s riches.

The Musical Instrument Museum is a must-see place for musicians like him, he said. It’s where you can find guitars that you haven’t seen in your whole life, he added. He then started the tour by meeting the museum’s curator. Hagar curiously asked how many guitars there inside the museum are. Rich, the curator said:

“We have actually several of hundred things that are categorized as guitars and we’ve got an entire gallery devoted to guitars right at our entrance, part of what we call orientation galleries.”

Upon roaming, Hagar saw different brands of musical instruments that are quite familiar to him, and he then pointed out Fender. He recalled:

“The first amp Ive ever played through lead guitar was through a fender basement with two 12s and the reason I used it is because when you cranked it all up it got real fast and back then everyone was trying to get this on stores in Amsterdam and they didn’t have all these overdrive units at a time it was even before a fuzz to them and I had that and the first Montrose album used this fender right over here. Man, these little 410, this base right there, 410 basement, that’s what he did the first monitor rock candy all that stuff through one of those damn guys crank out and play.”

Aside from that, he also got to see an Alice Cooper figure inside the museum, which the curator shared that most people who come by didn’t know that he’s a local. Hagar then agreed, saying:

Hagar ended his tour by suggesting that music fanatics should go there because it’s a must-try experience. Watch the full video below.