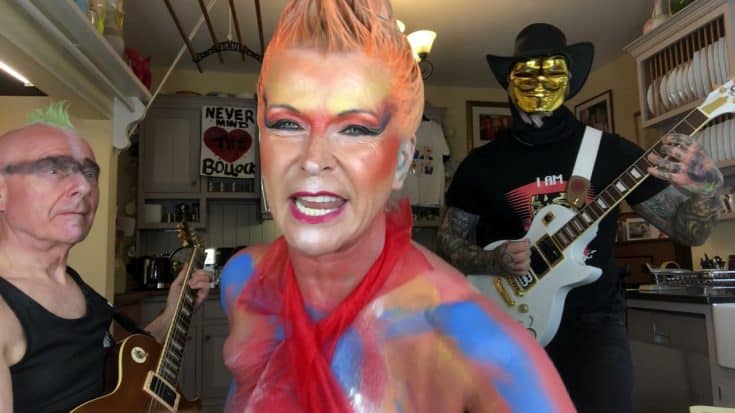 Well That Was Totally Unexpected

King Crimson founding member and his wife, singer Toyah Willcox are back with their Sunday Lunch series. Along with their mysterious masked guitarist Sidney Jake, they’ve been dishing out covers of classic rock songs from ZZ Top, Metallica, Scorpion, Judas Priest, The Rolling Stones, System of a Down, Led Zeppelin, Black Sabbath, and many more.

Last weekend, they went punk rock with an entertaining rendition of the Sex Pistols’ “Pretty Vacant”. Willcox revisited her roots as she used to be in a punk band during the early years of her career.

Willcox, as usual, went all-out and donned a fully body paint along with a mohawk and an extremely sheer top that doesn’t exactly serve any purpose. Throughout the video, the top is hanging on for dear life. And because this trio enjoys surprising viewers, Willcox did something that even Fripp probably didn’t expect. We won’t spoil it for you, just watch until the end of the video. Honestly, only she can pull that off!

Meanwhile, Fripp is preparing to embark on a North American tour with the rest of King Crimson. It kicks off on July 22 at the Ruth Eckerd Hall in Clearwater, FL.