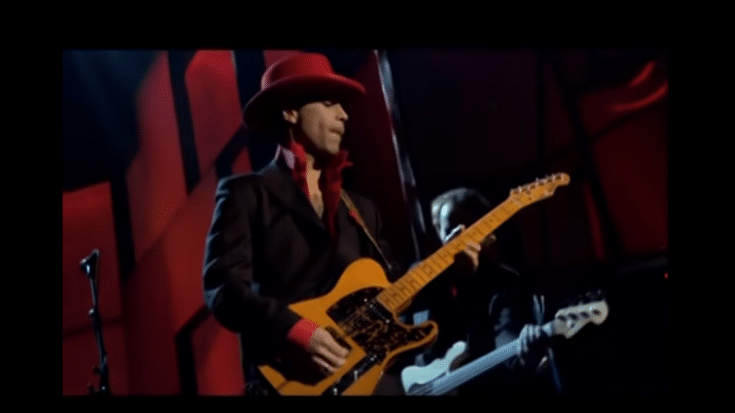 Prince may be a rock and pop culture icon but as a guitar player, he’s underrated and often overlooked. The guitar solo below showcased his chops and yes, he pretty much stole the show at the Rock and Roll Hall of Fame induction ceremony on March 15, 2004. George Harrison was to be inducted and a star-studded lineup paid tribute to him – one of them was Prince. Joining him on stage were Tom Petty, Steve Winwood, Jeff Lynne, Dhani Harrison, to name a few.

The solo alone is pure magic but then Prince ended the performance with a bang by tossing his Tele-style H.S. Anderson Mad Cat in the air and well, it seemed like it never came down.

The look on Tom Petty and Dhani Harrison’s faces is priceless as they were both clearly filled with joy and awe at Prince’s performance. Petty said, “You see me nodding at him, to say, ‘Go on, go on’. I remember I leaned out at him at one point and gave him a ‘This is going great!’ kind of look. He just burned it up. You could feel the electricity of ‘something really big’s going down here.’”

In case you’re wondering where the guitar went, Petty’s drummer Steve Ferrone was also confused even if he was also on stage. He recalled, “Everybody wonders where that guitar went, and I gotta tell you, I was on the stage, and I wonder where it went, too.”